Midi ain’t just for young punks any more… Or: It is, as long as we tweak our definition of both “young” and “punks”

In celebration of Children’s Day (June 1; yes, a bit late, but worth the wait, I’m sure), Midi, the people behind the eponymous rock and roll school in the suburbs of Beijing and those that brought you many-a music festival in various Chinese locales over the past dozen years, held a kiddie event in Beijing: Midi Kids. 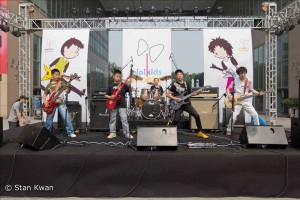 “Outside of the heavy academic pressure, it gives kids a chance to be close to the music, to experience musical instruments, to express their true selves,” we’re told. “While not every child can become a great musician, live performance gives kids and their families a chance to dip into the musical kingdom and have a pure spiritual experience of music…”

…an experience of music that’s not too loud: This guy here is making sure that things stay in the safe decibel level zone.

Word also is that, for the sixth time, a “mini band” (孩儿迷种子乐队) appeared at Midi Kids to cover this song, by Beijing pop-punk act Reflector:

And what Midi Festival would be complete without hand-drummers? 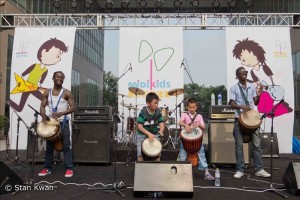 (the answer, for those of you who have not been to a Midi Festival is: no Midi Festival has been complete without hand-drummers roaming through the grounds. At the risk of both sounding like I’m bragging and becoming the target of kill-the-hippies type rhetoric: I was involved, in the festival’s earliest days, in helping ensure drumming became a Midi-must)

And, just a little while later… The Shanghai Daily also reports on a group of kids making rock a part of their education: The BRR Shanghai High School Music Festival, named for its three founders – Brian, Robbie and Regina – will host its second annual festival showcasing high-school rock and rollers at the end of July.  The BRR Shanghai High School Music League, says Robbie, provides a “matchmaking” service – musical matchmaking, that is – because “It’s a big problem for many young rockers to find peers playing the same kind of music at their own school.”

Nice to hear that the ‘big’ problem here is finding others playing similar music, rather than, say, encountering the ire of authorities scholastic and familial, and more evidence that we’re coming, slowly, a long way. Assuming, that is, that the article’s mention of “rock, punk and heavy metal” was not just hyperbole, but actually represented the styles on offer at the competition; the photo atop the article online certainly makes one think of the soft side of the spectrum.

To tie it all back to Midi, where this post began, we can point to the head of the Midi School and Festival, Zhang Fan’s earliest school days, which, he related to me – and which I relate in Red Rock – involved his own high school band. There was, he says, a Battle of the Bands, of sorts, back in his own high-school days in the mid-Eighties. But his band – four guitarists backing up his vocals – was the only one that caused a Beatles-on-Ed-Sullivan-type riot:

“The other groups were basically doing karaoke,” he said. “The show was in the cafeteria, and everyone  went wild. They were dancing on the tables. It got so the principal had to pull the plug because things got too crazy.” And that was with a set list that included “Sailing” and “On the Bayou.”

So between Midi Kids and the BRR Shanghai High School Music League and Festival, those about to yaogun seem to have more chances than ever.