A sampling of the adventures, thus far, of the author as he crisscrosses Asia on his mission to bring yaogun to the world. 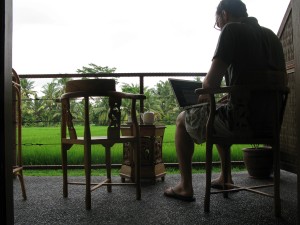 Greetings from Bali, where the temperature is a balmy 25C, but there’s always a cool breeze in the shade.

The Ubud Writers and Readers Festival is in full swing, and I come to you looking out over rice paddies and hearing, in addition to the soft flow of the creek that runs through the Junjungan Hotel and the constant chirping of the local insect life, the quacks of ducks who march single file along the edges of the paddies, not yet aware of the crispy fates that await them in this town famous for a local version of Peking Duck. The festival has brought more than a few celebrities – Jefferey Eugenides, Chong-Rae Lee and Nick Cave are the biggest names – but, more importantly, an amazing Ubuddy laid-back vibe of an environment where writers and readers of all stripes gather, discuss, learn and just hang. It’s the kind of environment where you’ll be hanging out with a Norwegian novelist and a Russian poet one moment and catching a ride alongside a British expert on the roots of Western sexual attitudes the next; dining with a now-Bali-based retired American professor and chronicler – with, of course, the requisite Kiwi transplant – of local folk traditions; and hanging with a Canadian graphic novelist while listening to a Cambodian rock band. You know, that kind of festival.

I did my first reading – ever (I’m a talker not a reader) – at an event held at the nearby House of Masks and Puppets, 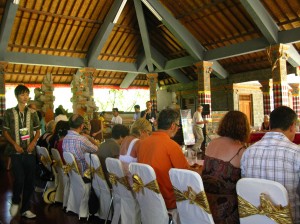 along with nine other authors and a couple dozen readers and after a great lunch, we were treated to an intense if fascinating traditional dance that involved, in no particular order, a man transformed into a horse, glass-eating, live gamelan music, a massive whip that struck fear in this observer as he tried to photograph it, dragon-dance-esque moments, meditative chanting, and much more. Yours truly was pulled away to speak at a panel entitled “Forget the ’60s,” whose mission was to lift high the the under-appreciated last two decades of the Twentieth Century.

I was also called in to chair a panel on “Writing to the Power of E” whereby writers of many stripes discussed the virtues, vices, pitfalls and territories of the digital age. Today, I have a solo set on the book. Meanwhile, to be able to hear – and meet – writers familiar and new has been amazing, particularly in this environment, where, more than most festivals, I’m told, we are thrust together in a more communal experience of both the local world and the worlds of the writers gathered.

We have been wined and dined, and there are still two more days and nights to go. Check in on the Festival’s Youtube channel for regular video updates.

I leave you with tea-time Balinese style: 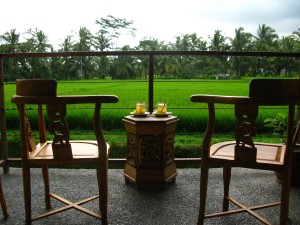