So when Asia Society asked me who I thought would be China’s Psy, I figured I’d spent the last of my efforts referring to Gangnam and the Style thereof. But then, via Beijing Cream and a bunch of other spots, came news that Gangnam popped up again in China, and not in an unintelligible fashion by some international superstArtist. In Wuhan, workers owed wages danced the horsey-dance in front of the building they say they have yet to be paid for constructing.

What’s even better than Ai Weiwei’s ridiculous video is that here, we see not only the Power of Pop, but of the ability for a serious issue to come to the Official fore thanks to a cultural phenomenon. Sure, this is a relatively ‘safe’ issue safe, which is not the case, for, say, monks in a certain Autonomous Region in the country’s west. But baby steps are progress worth noting.

I wrote, in the past, about how Cui Jian’s “Nothing to My Name” was used to criticize the handling of a train crash (and Evan Osnos’ New Yorker piece on the crash is an amazing window into so much of what ails China, and its railway, at the moment). That was an inspiring reminder that Art not only can address real issues, but that people see it as an outlet. But here, we have a new twist. First, we have the underrepresented involved. The workers who are building the New China but who seem light years from being able to join it. Sure, they’re led by a contractor that probably is going to take the lion’s share of the nearly-US$40,000 they claim is owed. But there they are. Another important element: The use of humour, of irony. Dancing for their dollars is certainly a new twist on expressing the desire to be recognised.

What this all shows is not just how widespread “Gangnam Style” has become – though that is an important thing to note. But we are also seeing a new energy with which problems are addressed, and with a new savvy on the part of a population that is otherwise invisible to most of the nation.

As the Chinese New Year draws closer and these workers do the calculations for how they’ll be getting home, things may turn more drastic. But for now, they dance. 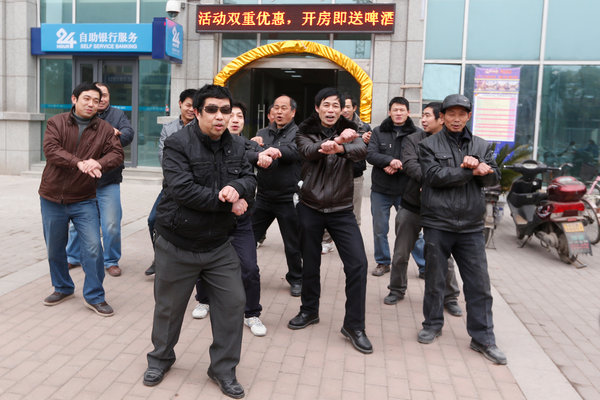