Sometimes, you forget that the touring situation for bands coming into China is actually quite normalized. There are clubs, presenters of some form, festivals and audiences awaiting in major cities across the length and breadth of the map. Rock, jazz, folk, metal, blues and other bands have been on what could be diplomatically referred to as trouble-free tours — speed bumps exist and appear on the proverbial road with a predictable regularity (though the size, shape and form of the bumps are never predictable), but a system, of sorts, is in place and has been, for a few years now. Just because it doesn’t look like touring the States doesn’t mean it’s not a system.

But, like I said, sometimes you forget. Because sometimes, you come across word of the recent experiences of a family band in China. And then you remember that there are crazies operating just outside the ‘system’ to which I referred, close enough to give the impression to bands of the rock ilk (those that play clubs, tour and sell CDs) that they are yet another presenter of gigs in the general rock and roll understanding of the term, but far enough from it that anyone who’s even had a glance at the touring road of the Middle Kingdom can smell an intruder from a mile off.

The trials of Joei and the Fulcos — and, I must add, these are not trials that seem to have upset the group/family much; they had their rose-coloured glasses on for their entire China visit, and it’s a good thing — are one reminder of the Other Side. The Fulco family, who de 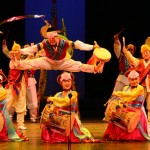 scribe themselves as the Partridge Family with attitude (and who were featured on ABC TV’s The Wife Swap), was drafted to perform at the Zhangjiajie International Country Music Festival. It’s a festival that has a pretty wide-ranging definition of country music, as evidenced by the festival website’s rundown of performers, such as the Wangqing dance troupe, at left, from northeastern China.

The Fulcos’ bio does not seem to appear on the 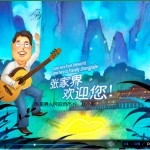 festival site, but their bio wouldn’t seem to belong among the dance troupes and large numbers of nothing-to-do-with-country-music acts gathered under Zhangjiajie’s banner (see, also, this article for a look at who was on the bill). The China Daily emphasized the tourist-related benefits of such a festival — alarm bells to the ears of those familiar with China’s frenetic festival scene, where local government departments with visions of endless tourist revenues are eager to jump into the festival-production fray — and concluded with talk of the mayor cartoonified, strumming a guitar to “Country Roads” (pictured above; the video is here). 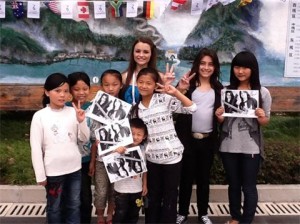 While one doesn’t want to take away from the Fulco family experience, one does want to emphasize the variety-show nature of the type of tour on which the band was put. The best thing that can happen with these wacko tours is that they create good fodder for writing and for stories told around the proverbial campfire. The worse thing that can happen, though, is that bands with genuine hopes fanned by excited and excitable presenters will wind up upset at the prospect of being little more than performing monkeys helping to sell condos in some far-flung minor city, or in front of an  audience super-psyched to get photos and autographs but one that doesn’t, on the large scale, tend to be too picky. Or, remember your name beyond “band from USA”.

Is there a chance that the Fulcos, and others before and after, can win hearts and minds over to the rock and roll (or country, or anything genuine, authentic or remotely original)? Absolutely. Is that part of the draw of touring China? Certainly. Having been on stages large and small in front of just those kinds of audiences, I’ve been both excited and depressed by the prospects, experience and aftermath. And the Fulcos’ experiences underline a big reason for touring in the first place: It’s news-worthy, a peg upon which a band, even in 2011, can hang some nice press coverage back home.

But for a band making a cross-continental trip, the key is to know what one is getting into. So Future Fulcos and assorted others: The Chinese music industry is in its infancy. Don’t be afraid, but do be aware.