anniversaries are nonexistent, save one. IndieChina has just reached that mark. Begun as a basic 2004-era source of yaogun info heavy on the BBS, its focus shifted from an initial emphasis on overseas artists before going more heavily Chinese in content. Pretty soon, gig- and tour-organizing followed, and a record label, 1724.

IndieChina is run by Niu Lei, a lanky and tall dude that, like a surprising number of

yaogunners I’ve met, has more of the air of a bank teller than that of an indie rock impresario. Niu Lei, who also goes by the name Road, has become one of the most important men in the country’s post-rock scene – a scene that, thanks to efforts like his, no longer rests at the fringes of the yaogun scene. There is more than just post-rock in the IndieChina world – Niu Lei introduced me to what is still one of my favourite bands, the folk-rock Omnipotent Youth Society, and there are others, including Summer Fades Away, who, perhaps recognizing that if you go ‘post’ enough, you go back to ‘pre,’ identify themselves as classical – but post- is a big part of IndieChina’s rock. Over at BeijingDaze, there’s an interview with Road that sets the scene for last weekend’s anniversary concert.

Under the banner of YGTwo Productions, I worked on a few events/tours with Niu Lei – including a three-band late-afternoon gig in an underground Tianjin bar preceded by a seniors’ lights-out dance party that remains one of the strangest gigs I’ve ever been involved with – but remained fascinated by his ability to find and attract some of the most interesting artists from literally across the country, and the way that he and those artists developed a serious, and nationwide, following for what is seriously niche music. 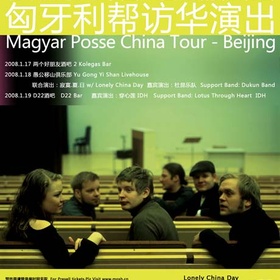 I first met Niu Lei as he was putting the final touches on a January-2008 China tour for the Finnish post-rock outfit, Magyar Posse (who, sadly, are no longer). Our first meeting, at a shockingly poorly-attended Magyar Posse show that I, along with others from the band, RandomK(e), nearly missed as a result of a debacle involving a microphone that may or may not have been broken during our show across town, would set the scene of Indie China’s interview with RandomK(e). The interview is in Chinese, but if you’re looking for a good time, try using a web-based translation service, created, say, by a California-based-search-engine monolith. You just might find gems like this description of yours truly: “puzzled, hair disheveled, quite hippy style drummer old Kang.”

Here’s to eight more years of Indie. And to a guy definitely worthy of his name: The first half of Niu Lei’s name has become the shorthanded version of that most respectful of yaogun epithets, niu bi, or ‘cow’s vagina,’  reserved for the most excellent of things, places and people.