Greetings from the campus of Hong Kong University, from whence this, the second dispatch on the Red Rock AustralAsian Tour, comes.

The Hong Kong International Literary Festival is nearly through, and yours truly has had a jam-packed two days’ worth 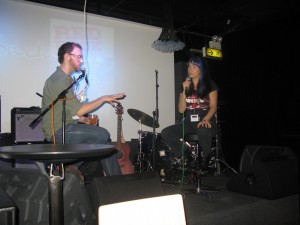 of events, beginning on Thursday night, when Underground HK‘s Chris B – also known to readers of a little magazine called Time as the “fairy godmother” of the Hong Kong rock scene – sat down with me onstage at Backstage, a little club in bustling Central (ok: where isn’t bustling in HK, but still). Chris has been putting on rock shows in HK, and playing in them, for just about as long as anyone’s been putting on rock shows, so it was a pleasure to sit down with someone so steeped in It. After a lively chat (if I do say so myself), Erik Pierce, of HK rock act Innisfallen, played a few tunes of his own, on the acoustic side of things.

The following day, out of the underground, so to speak, and into the schools: I headed to the Singapore International School, where a good group of secondary-schoolers gathered to hear all about the music of the Mainland. The Schools Programme is definitely a highlight of the Literary Festival here, enabling kids to get in on the action. It’s nice for me to have the chance to inspire young minds, and I was even able to work in a 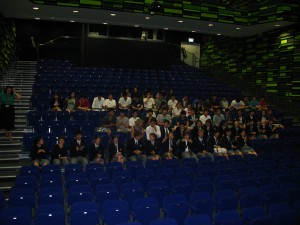 relatively contemporary pop-culture reference with which the kids were familiar (thanks to the breakdown of Billy “Green Day” Joe). Off, then, to the heart of Hong Kong, to an Irish pub in Wanchai, where I got to talk music alongside a British “national treasure,” the poet, writer and rock singer Simon Armitage and long-time HK-based writer, editor and more, Stephen McCarty.

Monday, I’ll speak to Hong Kong University’s Journalism and Media Studies before heading on to Australia for gigs at the Wheeler Centre (Melbourne), Hibernian House (Sydney) and ANU and Asia Bookroom (Canberra). So tell your friends!