Greetings from Singapore, where the Singapore Writers Festival is in full swing… Some geography and chronology to update you all on…

You were left, last, in Australia, which seems years ago but was, in fact, not two weeks ago. 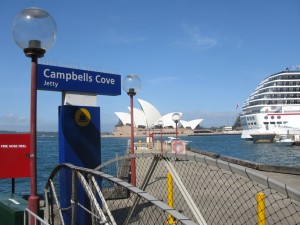 As you can see, my people, if not me, made something of an impression there, Down Under.

From Oz, I returned to Hong Kong, which, first of all, it should be noted, is not exactly nearby Australia. I suppose relativity is an important thing to keep in mind, but still. My concept of ‘being in the neighbourhood’ is not what you’d call based in geographic reality. Alas. It made sense, when all this was coming together, that if I was going to be in Hong Kong and/or Singapore and/or Bali, of course Australia was fit-in-able. And even if it doesn’t make sense, it happened.

The University of Hong Kong once again proved to be a fantastic host; this time around, it was the Comparative Literature and Music departments that hosted an excited, if intimate crowd of folks eager to hear and get a grip on yaogun.

While I tried to stay ensconced on the Isle of Lantau, Central Hong Kong keeps calling. For one, I catch an Underground HK show featuring an Argentinian ska-punk-gypsy band, Capitan Tifus at the site of my Hong Kong International Literary Festival talk with Underground’s prime mover/shaker/doer Chris B.

Discoering that I have timed my Hong Kong visit with …And You Will Know Us By The Trail of Dead‘s show, I attend, and have a great time, and even manage to get some time with the band to talk. They, like me, are all about Rock as potential agent of change. One thing that yaogun has taught me, and can teach rock and roll if folks’ll listen, is that rock can do more than be something nice to listen to. Founding member Conrad Keely has lately moved to Phnom Penh, and it’s his changing worldview that, seems to me, has inspired the recent change, though it’s not new that Trail of Dead cites politically active bands like Fugazi as influences. It’s refreshing to hear a band talk about rock as something… More… But it’s also frustrating to hear that it’s hard for them to be taken seriously on that tip by the media.

After Hong Kong, it was time for Singapore. A nice night out with a new friend turned ugly when an otherwise harmless late-nite order of mee goreng (fried noodles) did something horrible to me, and it was only by the power of yaogun that I was able to make it to the two Singaporean university talks scheduled for my first full Singaporean day ever outside of the airport. The two schools, Lasalle Arts College and the National University of Singapore, featured intimate but amazing audiences who were kind, understanding and extremely interested. 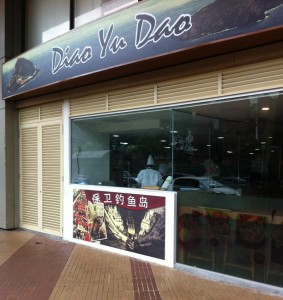 (Here is as good a point as any to throw in Singapore’s addition to the recent flare-up over the Diaoyu/Senkaku Islands, that pile of rocks in the East China Sea over which China [using the former name] and Japan [the latter] have had their most recent disagreement. When in doubt, cash in. I stumbled across The Diao Yu Dao [dao is Chinese for Island] cafe in my first hours in Singapore; the spread below says “Protect the Diaoyu Islands”)

The weekend brought with it the opening of the Singapore Writers Festival, the last stop on my five-week tour. My first panel, “Making It (Up) in the Middle Kingdom,” was alongside two very highly-respected, and gracious, authors, Linda Jaivin and Paul French and good times were had and spoken. 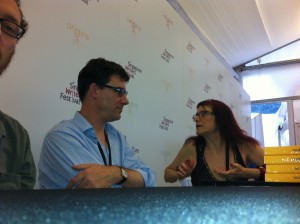 Here we panelists are (or, there they are, and there’s my left eye) awaiting the flood of post-talk autograph seekers.

One more panel to go, today, Sunday (“Writing in a Multicultural World”), and then I take in what’s left of the festival and this equitorial island-city-state, and return to November’s embrace in Toronto. Big thanks and shout-out to the Canada Council of Arts for their support in making this all happen. And stay tuned for more adventures in yaogun, always forthcoming.