The July issue of monthly Beijing English-language magazine the Beijinger featured a cover feature on yaogun, or, more specifically, the talking thereof (the article is downloadable here). 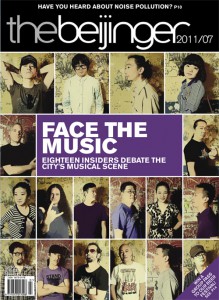 Under the banner of “The Great Music Debate”, the magazine gathered a dozen and a half members of the music community in a room, threw out some questions and took notes. There were folks from all corners in on the talk: Reps from record labels, festivals and venues; promoters, performers, observers and writers.

One thing in particular that struck me (other than a nice mention of yours truly) was the couple of occasions on which the general lack of recognition for that which came before was raised. It’s is something that I’ve fought hard to counter in recent years; it was, truth be told, in direct response to the realization that I hadn’t been giving the early years and those rocking therein the respect they deserve.

That recognition isn’t just a major theme running through Red Rock – my aim was to focus on the journey and the people that had paved the way – but it was the inspiration for it. It didn’t start out that way, but digging into yaogun’s history showed me the importance of the contributions of the early ‘gunners. (Which is not to say that Red Rock is only about the past; it is about, inasmuch is possible for any book, the current state of affairs in the context of how it came to be. Context, turns out, is everything).

So, with my ‘history is everywhere’ goggles on, when I saw the rock-talking panel in July’s Beijinger, I couldn’t help but think back to 2005, when, along with several members of the staff of the magazine then called that’s Beijing (now called the Beijinger), we gathered seven rock-scenesters to sit down over beers and talk rock.

In 2005, times seemed simpler. It felt like yaogun was still finding its footing; its glory days were far enough behind it that they seemed ancient history, and it wasn’t clear how it might regain any semblance of that time. The conversation had an overall pessimistic tone; there was a lot of talk about the obstacles up in yaogun’s way. It was a time, as Lv Zhiqiang (also known as Gouzi [‘go-dze‘), or ‘Dog’), put it, of challenges. “I think the music scene is in a bad way because nobody thinks of what’s wrong with it and how to solve the problems.” Lv ran then, and runs now, live venue Yu Gong Yi Shan (which was demolished and relocated to much fancier and larger digs in 2007). “We should figure out what’s wrong, and fix it.”

There was little international interest in yaogun then, in a way that seems inconceivable these days. Though one of the panelists, Leo de Boisgisson (as well as myself, though officially an observer rather than a participant), was in the business of exporting Chinese music along with bringing in international acts, it didn’t seem like yaogun was ready to take on the world just yet, as international touring for local bands was extremely rare (de Boisgisson had taken three amazing acts on a French tour the previous year; I was about to head to Scandinavia with Subs; a literal handful of others had made international trips).

Back then, there seemed to be no sign of the internet life as we know it today. Case in point: In 2005, we thought it important that a record store owner was in on the conversation. In 2011, Tian Jianhua, of skate-punk band Reflector, put it best when he said: “Times have changed, brother – nobody listens to CDs anymore.”

Changed, indeed. In 2005, “Stanley” Chen Yi, who was, then, PR Manager at Beijing label Scream Records, could still genuinely describe the kids buying his label’s records as folks that “regard rock music as their spiritual pillar…if they don’t have rock music, they may lose the meaning of life…(Nothing will change) their love of and attitude toward rock. It’s a part of their life.” This is the type of rocker I continually encountered during my yaogun research, and though it sounds pretty cheesy to hear it in this age of gigabytes of music swirling through the air, in one’s headphones on demand, one can’t emphasize enough how deeply these feelings were felt.

But not so much anymore. Tian Jianhua, himself having been deeply affected by rock and roll – and who, in turn, affected deeply through his own music, multitudes – put it succinctly during the 2011 panel: “The younger generation grew up eating McDonald’s. They’ve never had time to think deeply about anything.”

It’s the difference, broadly, between the pre- and post- Eight-Ohs, the general generational divide slapped through China’s young adult population (which, like any generalization, works only to an extent). Those born after 1980 (‘eight oh’) are painted with the broad strokes that describe that “Little Emperor” phenomenon, that unintended consequence of China’s one-child policy. When families of multiple generations share a home in a world defined by that definitely-post-1980 mission to make mounds of money, it’s bound to happen. There’s more money to spend on kids, and a desire on the part of parents and grandparents to overindulge  their only progeny. Add to that the technology with which these young’uns are surrounded and from which they seem to draw their very life blood, and what you get is not just a belief that all ought to be available all the time, but that this is how it always was and always will be.

So the idea of rock star has become different. Less something to strive for, or, gasp!, earn, than yet another thing on a list of desires that invariably get gotten for them. Again: these brush strokes are broad, but useful still.

Between 1993 and 1997, Niu Jiawei, who participated in our 2005 rock talk, worked at the Beijing office of Magic Stone Records, the label opened on the mainland by Taiwanese outfit Rock Records to cover yaogun. This was Magic Stone’s – and yaogun’s – heyday, when records sold widely and rock rang out from the stadium stages, radio stations and cassette players of the nation. Magic Stone and a few others created rock stars out of dudes previously slugging it out in the venues of the country’s underground. “It’s a problem if things develop too fast,” Niu said, in 2005, citing the record time in which rock stars were made, and the swiftness with which they were dethroned. “There was a crash. I don’t think rock musicians are suited to live like stars.”

Which is not what folks seem to be thinking in 2011. This year’s panel wrapped up with talk of the value and usefulness of handing out rock awards. Already, two such events occur: Mao Livehouse, the premier live rock venues of Beijing and 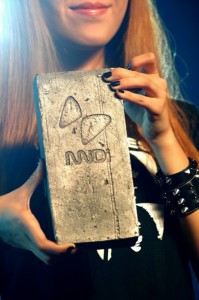 Shanghai, has been hosting awards from their earliest (2007) days with a nice mix of folks nominated and awarded. Midi Productions, those behind the Festival of the same name, decided, in 2009, to give out awards as well; reviews of Midi’s Awards have been mixed (I have been on the Midi jury, and am more often than not disappointed with how things turn out; more on that, I’m sure, eventually).

“Awards help to establish standards and attract more attention from the fans,” Liu Huan, deputy general manager of the Midi Festival and Midi Productions told the panel. “We need to make the stars stars.”

That statement is what differentiates the two rock panels: In 2005, we weren’t talking about stars, we were talking about survival. And it’s tough to know where I’d rather be.