Album of the Year
The Gala – “Music-mates are hard to find” GALA《知音难觅》
Black Head – “The Xi’An Incident” 黑撒《西安事变》
King Ly Chee – “Time Will Prove” 荔枝王《时间证明》
Escape Plan – “The World” 逃跑计划《世界》
Lure – “Retrograde Kingdom” 诱导社《逆行王国》
Props for including Escape Plan (Perdel, please!) and good to see Lure, an old turn-of-the-millennium fave that made mean-ass Primus-esque slap-bass-heavy alt-funky-rock, back. Nice to see Hong Kong get some love via hard-working hardcore punk band King Lychee, and you, ok, I, want good things to happen for Black Head, a rap crew straight outta’ Xi’an and playing a truly unexpectedly interesting combination of folk and rap (which might make them more the former than the latter) with live instruments. But I’m pulling for Perdel.

Song of the Year
The Gar – “Love, eventually will omit the youth ” 嘎调《爱，终将把青春遗漏》
Black Head – “Rukawa Kaede & Sora Aoi” 黑撒《流川枫与苍井空》
King Ly Chee – “Time Will Prove” 荔枝王《时间证明》
Brain Failure – “Eternal Utopia” 脑浊《永远的乌托邦》
Escape Plan – “The brightest Start in the night sky” 逃跑计划《夜空中最亮的星》
Lure – “Retrogade Kingdom” 诱导社《逆行王国》
Again, I guess, glad to see Lure in there; ditto for PERDEL (Escape Plan, really?). And Black Head is truly growing on me. I did, however, pick The Gar, although it was for another song, so I’m sticking with ’em.

Here’s the thing. For me, there aren’t enough ‘great’ vocalists of either sex to justify splitting it up by gender, so there ought to be one shorter list of male and female vocalists to choose from. And if you’re not going to have a male/female split for other categories, particularly in the Best Rock Instrumental category, then why do it here? Is this the only category a woman can win in? It’s definitely just about the only one that there are females represented in.

Best Female Rock Vocal Performance
Helen Feng of Nova Heart 冯海宁-Nova Heart
Kangmao of Subs 抗猫-Subs
Suna of Gemini 苏娜-简迷离
Wang Qing of The Bigger Bang! 汪婧-Da Bang
Yingzi of Fall In Sex 樱子-秋天的虫子
This is the one pick of mine that ended up on the nominees list. And I’ve thought that Kang Mao has deserved it every year.

Best Hard Rock Performance
King Ly Chee (荔枝王)
Brain Failure(脑浊)
Twisted Machine (扭曲机器)
Iron Kite (铁风筝)
Oxygen Can (液氧罐头)
Brain Failure is punk, King Lychee is hardcore, Iron Kite (which has been around forever) isn’t ‘hard’ and the other two are metal bands. Of this bunch, though, I’m going with Brain Failure. And they get bonus points for having their own website.

Best Metal Performance
Frosty Eve (霜冻前夜)
Four Five (肆伍)
Yaksa (夜叉)
Oxygen Can (液氧罐头)
Suffocated (窒息)
See: I told you Oxygen Can was a metal band! Unless it’s a hard rock band in the wrong category here. And I know we all want to encourage genre-busting, but don’t the awards have categories for a reason? Suffocate ought to sweep up every category, frankly. Just so happens they celebrate their 15th anniversary this weekend. And no other band on the list has been involved in the production of a Shakespeare play (Coriolanus), so there’s that.

Best Rock Instrumental Performance
Morin Khuur player Batubagen of Hanggai (巴图巴根-杭盖乐队马头琴)
Vocalist & bass player Mamur of Mamur & IZ (马木尔-马木尔与IZ主唱／贝斯)
Guitarist Guan Wei of Muma & Third Party (关伟-木玛&Third Party乐队吉他手)
Guitarist Xie Yugang of Wang Wen (谢玉岗-惘闻乐队吉他手)
Hmmm… Again, with the folk situation; Hanggai’s Morin Khuur player, while deserving of a nomination (heck, the award for that matter), it does say ‘rock instrumental’. Anyway, we should be bringing down barriers, right? But I’m going with Xie Yugang. And only partly because of how excited I was when he told me he’d bought an electric toothbrush, because I went electric myself and was loving life for having done so. But then he told me that he bought it to use on his guitar, which, well, duh. Check out Wang Wen’s new split 12″ record with Swedish experimental instrumentalists pg.lost on Bandcamp.

Best Live Performance
Nova Heart
Second Hand Rose 二手玫瑰
Hanggai 杭盖
Brain Failure 脑浊
Escape Plan 逃跑计划
Tough category: Nobody can get a crowd going, and laughing, like Second Hand Rose; nobody can transfix a crowd like Hanggai; nobody can get the young girls screaming like Escape Plan; few bands can help launch a book like Nova Heart; and nobody’s been getting crowds going in more places around the world than Brain Failure. My pick, though, is Second Hand Rose (again: with bonus points for having a website).

Best Album Art
Black Head – “The Xi’An Incident” 黑撒《西安事变》
Four Five – “No Leader” 肆伍《NO LEADER》
Escape Plan – “The World” 逃跑计划《世界》
Iron Kite – “Where urban and rural junction” 铁风筝《城乡结合处》
Xiongxiong’s Homework – “Morning Sun” 熊熊作业《八九点钟的太阳》
Zhang Weiwei & Guo Long – “White Silver Hotel” 张玮玮与郭龙《白银饭店》
Zuoxiao Zuzhou – “Going to Naizifang” 左小祖咒《去奶子房》
With the caveat that I’ve seen none of these in real life, I’m going with Zuoxiao Zuzhou. This is the guy who did up an earlier album of his to make it look like traditional Chinese music so that old folks would buy it, put it on, and have their brain blown up by the off-kilter, out-of-key and abrasive music and singing. You gotta like that attitude (you know, as long as you’re not an old folk who’s into traditional music). And he’s always been good at putting the ‘Art’ in ‘Album Art’ (in addition to his own stuff, he worked with that aye way-way guy a bunch) and doing it really well.

As for the final category, Greatest Contribution to Yaogun, well… I’m pulling for VOX, the Wuhan club-cum-org that’s helping to get yaogun deeper into China’s interior. Just as long as Midi doesn’t give themselves another award, like they did in 2010 (though they did give it to Cui Jian in the Awards’  inaugural year). Last year’s winner was Modern Sky, the label that ate up a significant share of the national festival business, which seemed, for a while there, like it was Midi’s pie alone. 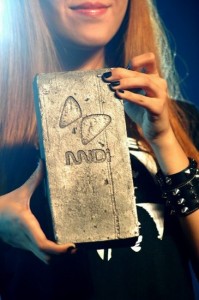 And that’s the Awards, as I see them.

Sunday, Dec 16 the bricks will be handed out, and debate will no doubt ensue.