On Xmas, 1998, as they generally did on most nights, Beijing punks flocked to the Scream Club. But this time, it was different. It was Christmas. And: There would be an album.

While not exactly your typical holiday fare, there was the inclusion of one holiday jam, performed, erm, interestingly, by a band calling itself Rock Star. Visit here to stream the tune. 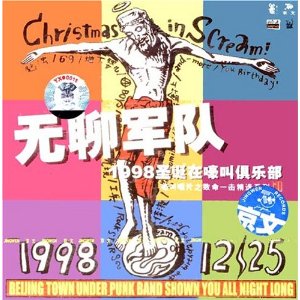 In 1999, a superior Boredom Brigade record came out, the double-disc sort-of-self-titled Wuliao Contingent (无聊军队) upon which I lather praise here, but since it’s that most wonderful time of the year, it’s worth revisiting the record that put the ‘daze’ in ‘holidays’. Or something.

Below, original Brigadesters Reflector, celebrating the tenth anniversary of the double-album, reunited with their original lead singer, Guo Feng, for what might be the posse’s most celebratory song, “Boredom Brigade” (“Come join the Boredom Brigade/You’ll be happy here.” And to all a good night…