Perusing the list of bands attending the 2013 South by Southwest Festival (aka SXSW) in Austin, Texas, I came across an artist I hadn’t heard of before, and proceeded to be mesmerized and inspired by what I’d found. Baishui hails from the small Sichuanese city of Yibin, from whence he has created a large catalogue of amazing music ranging from traditional folk to ambient and experimental. Not only is Baishui geographically miles away from anywhere remotely yaogun (he’s 300 km away from the very rockin’ city of Chengdu), but musically his work is much subtler than most of what’s being produced in the rest of the country. Check here for updates on his SXSW appearances. (Though initially the only Chinese artist on the SXSW lineup, Baishui will be joined by record label Maybe Mars‘ bands White+, Carsick Cars and, my personal favourite, the Gar)

From a different musical place hail two bands I came across in the wake of their sharing in the spoils of victory in Converse’s search for “New Noise” late in 2012. Paowang 炮王 (Beijing, who are in the midst of changing their name) and the Tree 树 (Hangzhou) both won trips to New York city to spend two days each recording in the Converse Rubber Tracks Studio, and I, for one, am looking forward to hearing the results of those sessions, and whatever others are to come. This (Chinese) blog post covers their NYC trip.

The Tree has already given us something new, and different: this video for “On the Road,” comes from a 31-minute documentary (funded by Converse) following three graffiti artists across southwestern and western China.

In other video/movie news, Zhaoze, the amazing Guangzhou-based post-rock group whose former English name was the Swamp, has dropped a quick piece of music featured in Lou Ye’s film Mystery, which came out late in 2012.

Post-punk outfit PK14, meanwhile, spent time in Chicago recording at Electrical Audio, alt/indie rock hero Steve Albini’s studio, in 2012; the fruits of that labour are said to be coming out early this year. 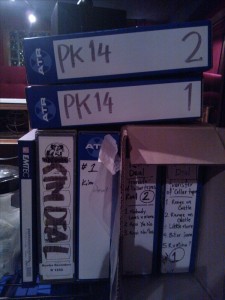 PK14 frontman Yang Haisong’s other project, the heavily-My-Bloody-Valentine-y Dear Eloise, is said to be releasing a new record in the coming months.