March 23 is Earth Hour, the World Wildlife Fund’s global participatory event to promote awareness of climate change. And so, a jouney into yaogun’s green connections… 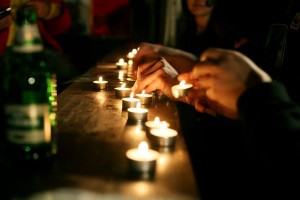 For one, there is my own experience with yaogun and Earth Hour: For RandomK(e)‘s fifth anniversary gig, we hosted our own Earth Hour event at the legendary 2 Kolegas. In addition to our set, we had candle-lit acoustic music, drumming and much more fun. What better excuse to let the world (re)hear that epic set (complete with a tune called “Green”)? 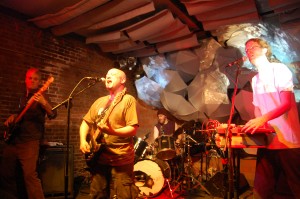 Big ups to jrg_one, who is now dropping multisensory recklessness on Hanoi, for putting the thing up at Soundcloud:

There have been other examples of yaogun coming together under the banner of the environment.

In 2007, Xie Tianxiao collaborated with Greenpeace in the creation of a video (full, sensitive viewers should note, of the stark and violent imagery of environmental destruction) for his song “I Don’t Love You”:

Xiao Wei, from the band Catcher in the Rye, worked more extensively with Greenpeace that same year, heading to Papua New Guinea to volunteer in the Paradise Rainforest, and composing a song, “Green,” based on his experiences.

Both videos coincided with the Midi Music Festival’s first collaboration with Greenpeace in 2007. Prior to that, the festival hadn’t done much in the way of activism, though its 2003 event did raise awareness of animal protection, asserting that “they cry, too”: 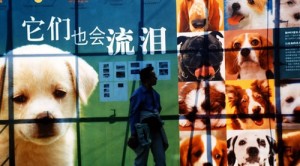 The Midi Festival did get into the environmental game eventually; in 2011 the festival partnered with Animals Asia and featured a ‘Love Bears’ campaign with the slogan ‘Protect the Moon Bear, oppose live bear bile products’ leading the way. The idea was to bring awareness to the practice of bear farming, a process by which the animals are caged in abominable conditions in order that their bile might be extracted and used in a variety of traditional medicines.

The following year, the festival’s theme was “PM 2.5” – the size of particulate matter (in microns) that can penetrate the respiratory system and cause health risks. The idea was to focus attention on China’s environmental problems, and given the late-2012/early-2013 Airpocalypse action, where, in Beijing and the surrounding areas, pollution levels were literally off the charts, Midi’s theme was timely, to say the least.