Couple of things headed to NYC stages, though, perhaps not exactly the ‘stages’ that one might expect to hear about from a blog about yaogun. We’re talking about the theatre, and audiences get a couple of glimpses into Chinese music and beyond in the near future…

(Americans looking to experience yaogun in the more traditional setting should stay tuned; updates on some US dates are coming very soon…)

Meng Jinghui, long known as the ‘bad boy’ of experimental Chinese theatre, began his career putting on Western plays before staging his own productions, striking gold with his 1999 play, Rhinoceros in Love. According to the China Daily, by 2011, Rhinoceros had become the country’s most popular drama in a decade, performed well over six hundred times for 1.2 million people cross-country, and at a thousand campuses. 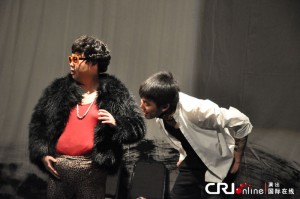 Meng’s 2012 play, which was initially translated as Bad Boy Carnival (混小子狂欢节), is coming, sort of, to the US. According to the Chinese promotional material, the play “tells the tales of ten teenagers who seem rebellious, arrogant and ill-mannered but in fact they all have a soft spot for maternal love.” The US version, meanwhile, describes the play as “[a] gritty exploration of Beijing’s underground punk scene, complete with songs and slapstick.” Somewhere in between, one imagines, lies Meng’s work, which was performed by an all-male cast (and featured, one should add, a not all-male list of roles), and feature 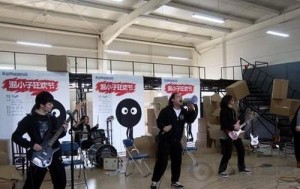 (Check out this video for some related quirky folk in which members of the cast of Rhinoceros, and their director, appear under the banner of the band Three Oranges, alongside Beijing folk faves Zhang Weiwei and Guo Long, who have performed music for some of Meng’s plays)

Later in the month, another Chinese musical adventure comes to a familiar NYC stage: 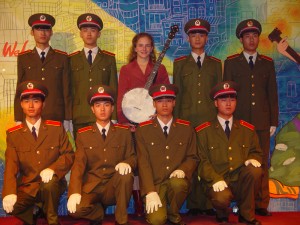 Abigail Washburn (at left, in Chengdu, 2004) is likely no stranger to followers of this blog, Beijing music, American music, US-China relations, NPR and more. Under the banner of YGTwo Productions, yours truly has put together a number of China tours for the banjo-playing, bilingual-singing, folk-and-then-some artist, for a range of different projects that China, and, in some cases, the rest of the world, has been lucky enough to witness. Those China tours, and Washburn’s seventeen-year relationship with China, form the basis for the performance Post-American Girl, which mixes Appalachian and Chinese folk art, sacred harp song, traditional music and new compositions and will be performed at Joe’s Pub March 28, 29 and 30. The production is part of New York Voices, the venue’s commissioning initiative.

The behind-the-scenes glimpses in this photo album should whet your appetite.