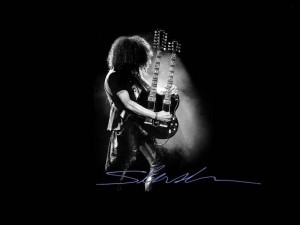 Excitement for the Slash show was high: Online magazine-and-then-some SmartShanghai reported that 3/4 of the 800 tickets were gone in the first 24 hours, and the remainder were quickly gobbled up. Alas. As excited for their guitar hero as the Shanghai set may have been, their fever did not extend to the first portion of the evening. Though the yaogun  world celebrated Duck Fight Goose’s inclusion as opening act, those that had shelled out RMB980, or US$160 (including one drink!) to see Slash were less than celebratory. Perhaps had the ticket price included more than just one drink…. Alas. According to the Facebook page of webzine Shanghai 24/7:

So, apparently Duck Fight Goose got booed off stage at the Slash gig last night… Han Han remained cool about it though – ‘haha, those kids, I understand them’, was his comment. Too bad for one of SH’s best. 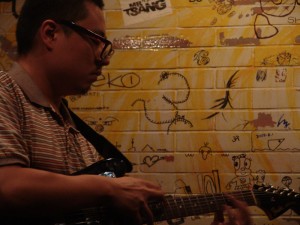 perstar axeman were less than excited about a band they’d never heard of—and, more than likely, would never again hear from. Of course, the opening-act phenomenon is blessing and curse the world over; to a band, and their fans, chosen to play alongside big names, it’s a huge deal. The reality, though, is that ticket-buyers are generally there for one reason only, and the opening act merely represents the opportunity to fuel up for the headliner. So audiences tend to be either fiercely loyal to the opener or the headliner. Particularly in the context of Slash’s Shanghai gig.

This isn’t the first time something like this has happened in yaogun. Nor will it be the last.

In Red Rock: The Long, Strange March of Chinese Rock & Roll I write about Thin Man‘s Big Break, opening for Linkin Park in 2007. Thin Man was one of the bigger Beijing acts coming out of the late-nineties alt-rock scene, taking their main cues from Rage Against the Machine. Their Scream Records debut sold well, they wound up playing 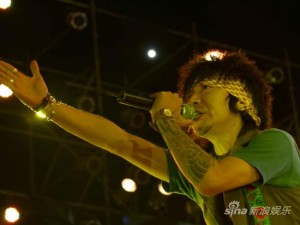 the Fuji Festival in Japan—twice, in 2000 and 2001—and their fanbase continued to expand. Like Duck Fight Goose, it was seen as a great sign that Linkin Park’s China debut would include a local act; China had been waiting a long time for Linkin Park, and the band’s fanbase was enormous. Again, alas.It wasn’t so much that Thin Man wasn’t ready for the stadium as much as the stadium wasn’t ready for Thin Man. Despite Linkin Park’s rock roots, their fan base at Hongkou Stadium that November night was not drawn from the rock population. Thin Man, by all accounts, did as decent a job as could have been expected under the circumstances. But the crowd, who had come to hear Linkin Park and nobody else, booed Thin Man throughout their half- dozen-song set.Promoters should be applauded for their efforts to include local acts—and encouraged to continue to do so, despite what has been happening and will no doubt continue to happen. Maybe Duck Fight Goose was a bit too challenging for the Slash set, but one suspects that the reaction had very little to do with anything musical happening onstage.

At the club-level (and, yes, Slash played in a club, but he is not a club-level act), this local-visitor relationship has been happening for years. But in large venues, there is an educational deficit at work. The one thing that needs to be kept in mind is that all of this—things like rock venues, rock concerts, pop concerts, pop artists, visiting artists, local fanbases, and, importantly here, the idea of the ‘opening act’—is, relatively speaking brand new. It’s only been thirty-odd years that Chinese artists of any kind have had a fanbase; large-scale concerts featuring only one artist were not normal until well into the nineties. Overseas artist fanbases have existed for even less time, and the opportunity to see those overseas artists in concert has only been a somewhat normal occurance for barely fifteen years.

Audiences are still learning. The idea of an opening act goes against the concept of the superstar headliner: Opening acts aren’t ‘famous,’ a word that is essential to most large-scale show audiences’ understanding of and relationship to their favourites. If they were, we’d have heard of them.Seems to me that Thin Man and Duck Fight Goose have come away from their Big Breaks stronger. The key is that they are interested in reaching a larger audience, outside of their normal range. That is why yaogun is only going to get better.