The deja-vu encountered by looking through the Modern Sky Festival’s early-October 2013 lineup inspired the penultimate post by the now-done-with-Tumblr Slink Rat. It’s a deja-vu this blog has also had, and one that all fans of yaogun and observers of China’s growing festival scene should, too. In short, Slink Rat questioned why, with as genuine a curiosity as one might intuit from a blog post, it is the case that the same bands play the festival every year. To that we might add the concern that this is happening across the festival landscape in a way, Slink Rat points out, that wouldn’t fly elsewhere.

A couple of years ago, I did a “quick survey” of Midi Festival lineups and found that, in the summer of 2011, Miserable Faith and Yaksa had appeared at twelve Midis; AK47 and Brain Failure, eleven; Twisted Machine and Sand, ten; Subs seven; Ruins and the Verse, six—and the bulk of these acts had been slotted in the later evening for much of their years on the bill.

With Midi—and Modern Sky—in recent years expanding to multiple events each year in various cities, one can see the value in a traveling road show bringing yaogun to the various points that Cui 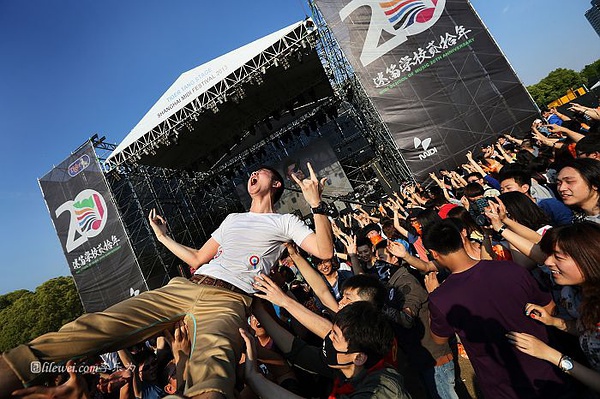 Jian outlined with his New Long March for yaogun. But with more festivals popping up, and with the scale of each successive event  determined to grow from year to year, well, you’re left with many more stages than artists to fill them. Nobody is looking to shrink their festival. Especially in what seems to be a golden age for sponsors throwing money at massive outdoor gatherings.

Slink Rat makes a valid point, speaking of a friend that listens to the same four songs for months on end. Certainly Chinese audiences—like all audiences—like to hear that which they know. The question remains, though, how to balance what audiences want to see with what they might like to see. Because one worrying outcome, already long-overdue for examination, is that the same names appear constantly. Another: That events fill slots with those less-than-prepared for the experience. And: Those filling in the slots are rarely incentivised to improve.

Perhaps in light of the recent CCTV report (via China Music Radar) on how concert ticket prices are getting out of hand, festivals, too, might want to take a deep breath. Because even if festival tickets in China are more affordable in a global sphere, they are not cheap for your average local festival-goer—a population that is new to the festival idea, but, with the rate of expansion, gaining an increasing amount of experience consuming these events. And so, like any widget or item on the grocery list, festival goers are going to start to wonder if they’re getting what they pay for.