An unusual though, unfortunately, not completely out of the realm of the related subject for this space. Sino-Japanese relations are again in the news, most recently due to a Prime Ministerial visit to a shrine. It’s an incident that plays out repeatedly: The Chinese see the trip as Japanese celebration of war criminals and crimes; the Japanese make the trip to honour those they believe died defending the nation.

At no point between, say, 1931 and today have Sino-Japanese relations achieved a status that might be described as anything better than strained. And the invocation of Harry Potter villainy on both sides only brings things to a new level. It’s a small step from fantasy books and films to yaogun. Though one might not imagine yaogun, or the Midi Music Festival—the country’s longest-running festival—to exist in a context in which this matters, the truth is that there are very few contexts, if any, in which it doesn’t matter. Thusly is a look back called for.

It was, in October of 2003, a risky proposition to invite a Japanese rock band to participate in the fourth Midi Music Festival.

Over the course of the nineties, Japanese artists performed at various Beijing International Jazz Festivals and, in 1997, Japanese punk bands Pridebowl and Envy toured with no reports of problems among the punks of the day. In 2003, Midi was still in its early days, and officialdom often threw the switch on the festival with little warning and reasoning. That spring, the festival had been cancelled due to concerns over SARS, and it was something of a miracle that it had been officially rescheduled to the fall. So when Brahman, a perfectly mediocre Japanese rock act, appeared on the festival schedule, breath was certainly bated.

In late September, a report emerged from the southern city of Zhuhai of a massive sex romp involving several hundred Japanese businessmen; several hundred prostitutes gathered from the greater Zhuhai area; and three floors, many rooms and at least one hotel bathroom of the International Conference Centre Hotel.

While the scale of this episode may seem noteworthy, most visitors to just about all types of hotels across China—particularly at that time and among the smaller cities of the nation—wouldn’t be surprised to hear that prostitution was as much a part of the Chinese hotel experience as the malfunctions of the multi-functional-and-buttonned-and-dialed nightstands controlling lighting, air conditioning, television, radio, phone and often other elements difficult to discern. Late-night phone calls and/or knocks-on-doors with garbled offers of services ranging from the potentially (but not) innocuous “massage” all the way up the spectrum are not unknown to hotel guests regardless of their interest therein. Zhou Guangchuan, a Henanese pharmaceutical executive staying at the ICCH, didn’t even have a chance to ignore the ringing.

Zhou’s determination, make no mistake, was fueled equally by his feelings about the conduct and nationality of those involved. “I hoped that the Hong Kong media would tell the outside world,” Zhou is quoted saying in the Telegraph piece, “tell the Japanese that their citizens have no culture and no morals. They are the worst—worse than animals and they should never be allowed to enter China.”

While not disallowing a legitimate amount of shock and disgust over the scale of events occurring on that September eve, let us ponder what that same Henanese businessman might have found had he stepped off the same lift on some other night at any point in time over several years prior to or following those events. The reality, though unprovable, is that he might well have come upon a smaller if equally distasteful sexual pastiche—involving any number of nationalities. But, alas, Mr Zhou found these Japanese at that exact moment. And, instead of getting justice served right away, justice festered, and it was late September before the news spread, like wildfire, across the nascent, but active, webosphere.

(According to CBS, warrants were issued for three Japanese citizens, but fourteen defendants charged with organising the “romp” received sentences ranging from two years to life in prison were Chinese.)

And then, it was National Day, October 1. The Midi Music Festival’s fourth installment. 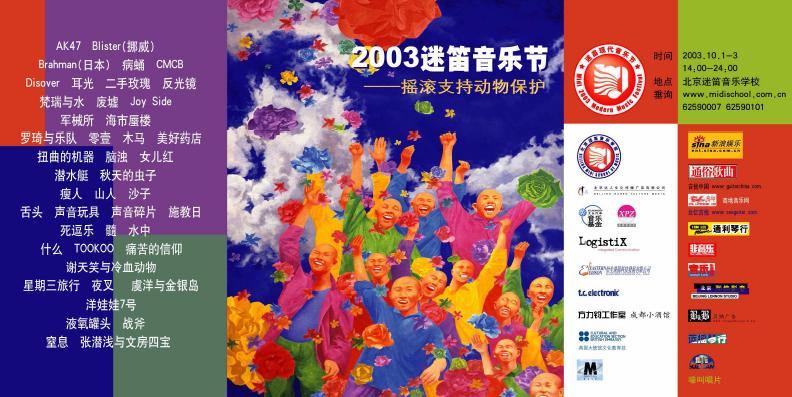 Brahman was welcomed by an onstage host. “Comrades! We welcome, in peace, Brahman!” Footage of the band’s first two songs at the festival is up on Youtube. In the ten minutes we are granted into the performance, there are plenty of projectiles hurled stageward: Water bottles, unidentified flying objects, possibly an egg. Not pretty, but also not necessarily indicative of anything awry—after all, audiences are known to express their excitement through all kinds of activities, and it’s not only panties that get hurled stageward in excitement: The chicken wire protecting the Blues Brothers wasn’t only for bands the crowd didn’t like, and the loogies hurled punk-band-ward were not necessarily hateful. 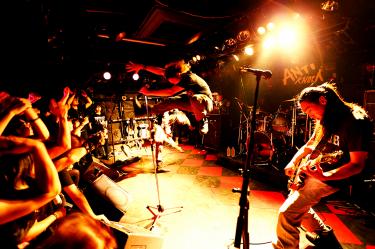 What we don’t see in the footage is when things get out of hand. When the band has to leave mid-set. When the director of the festival emerges to calm the crowd—to remind them that it’s precisely guys like Brahman, and guys like you, the audience, that can change the stupidity of what’s gone on at official levels—only to be hit with projectiles himself; when the frontman of Thin Man—a popular yaogun band that had, at that point, known, and enjoyed, some fame in Japan and wanted to return the favour—can’t talk the rowdy percentage of angry dudes down off the ledge. When yaogunners in the audience give up trying to reason with the racist diatribes of their fellow onlookers and, in a few cases, resort to violence.

The following year, I came across three young dudes selling ‘boycott Japan’ shirts. “Why?” I 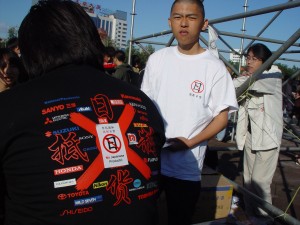 asked, knowing the answer, but wanting to hear it nonetheless. “There is no why,” I was told. Prodding further, “national emotion,” in thickly-accented English, was the reply.

And all this at a festival whose guiding principle in 2003 and 2004 was John Lennon’s oft-cited line: “I hope someday you will join us.”

It was a while before Japanese bands performed at future Midi Festivals—in 2006, jazz group Yokohama Artists Association performed; in 2007, metal singer Minoru Niihara performed—but the spectre of the 2003 incident remained. In an interview, festival head Zhang Fan spoke of the precautions taken in 2006, which included ensuring that mellower music was involved (YAA played jazz) and scheduling them for the first slot of the afternoon. In October, 2010, the festival’s second event in the Jiangsu city of Zhenjiang, three Japanese bands performed. And photographer Matthew Niederhauser filmed this flag-burning incident.

Yaogun will not be spared the effects of Sino-Japanese relations anytime soon, but one might be comforted by the fact that those effects haven’t yet stopped Japanese artists from visiting the Mainland. 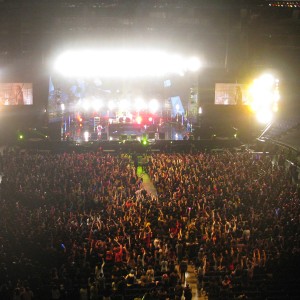 Indeed, on that front, I have seen what I hope is the future—in Sino-Japanese relations, that is; musically, I have hopes for a different direction—and it happened on a Shanghai March evening in 2012. It was from the comfortable perch of a Mercedes Benz Arena corporate box that I saw L’Arc en Ciel, a pop band whose look combines goth zombie and cosplay convention, perform to a stadium full of young Chinese, who sang and dressed along, cried themselves hoarse and waved glow-sticks like they were a form of life support.

One hopes that, first, yaogun “incidents” become a thing of the past, and that these visits go some way to helping mend the damage.

Because yaogun should know better.