Did we all jinx it by getting our hopes up? By “we all” I mean the million reports on the invitation Chinese rock’s alpha and omega, Cui Jian, received to perform on China Central Television’s massivest Spring Festival Gala, and the zillions of zeros and ones involved in the multi-lingual speculations as to whether he’d play “Nothing to My Name” if he accepted.

Alas. Call it the Year of the Hoarse. The New Year will not kick off with a yaogunny bang. At least not on CCTV.

On Jan 15, The New York Times reported that Cui will not be appearing on the Big Show. According to the paper, You You, the yaogunner’s recently-extremely-oft-quoted manager—referred to by the Times as his “agent”— said that Cui will not appear “[b]ecause we cannot change the song lyrics.” It’s not definitely off—one source told me “it could still happen”—but it doesn’t look good. A Jan 18 Associated Press report has since clarified. The Show wouldn’t allow him to play “Nothing to My Name”. Rather than choose another song, Cui opted to sit out the Gala.

I first wrote of the invite and its context last week. To me, every possible outcome has special significance:

i. He goes on. A very big deal for Cui, but, more importantly, for yaogun. Though he’s been on CCTV before, and is, generally speaking, in the good graces of The Man these days (viz. no lyrics on his last album censored, the goodwill generated by his recent anti-lip-synching campaign that helped result in a law banning the practice), a slot on the Gala’s bill means direct access to two billion ears, and a billion hearts and minds. Observing Cui’s forrays into the mainstream—from a quick appearance on The Voice China to his appearance, in 2013, on Hunan Satellite TV’s own New Year’s Gala and in his shows and interviews—one sees very clearly that his interest is not in self-promotion, but in sharing with his fellow citizens the beauty, truth and power of yaogun. The Big Show is his chance to bring yaogun directly to The People—people who have yet to hear his message.

ii. He declines. Screw you, The Man! Cui would seem to score a victory for yaogun in its battle against co-optation. Meanwhile, followers of the Gala’s leadup—those millions that Cui so deeply believes would benefit from joining the Long March of Yaogun—wonder why anyone in their right mind would turn down the chance to go on television. Any television, let alone the biggest television event in the universe. Which will only hurt future conversion efforts—to say nothing of the reluctance of a Show-runner to invite someone back who’s already turned them down once. 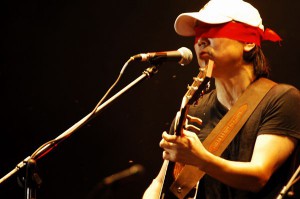 iii. He goes on, but gets cut from the final Show. It’s already happened once, when Cui recorded a set for CCTV’s online gala in 2012. If a yaogunner sings a song and nobody’s there to hear it, does he rock the boat?

iv. CCTV yanks the offer. Cui wins, because he’s up for performing; The Man is the villain for denying The People their Voice. The Masses don’t know the difference, while yaogunners and Cui fans change their tune. The “I wonder if he’ll play ‘Nothing to My Name’?” debate becomes the complacent “Of course They wouldn’t put him on!”

What we have is a combination of ii and iv.

One of the oft-cited explanations for the offer in the first place was CCTV’s concerns that their Show was losing audiences, long exasperated by the same old thing. As much of China heads to the free market, we see, on television, the same situation as is being played out across the map: More Shows appear on the landscape, and CCTV, with its heavily-structured/regulated/censored framework (pro: no lip-synching allowed; con, for Cui, only “songs with ‘healthy’ lyrics” are permitted), loses audience share. Wonder whether any of CCTV’s competitors will seize on the opportunity to offer Cui a New Year’s slot (again).

Does Cui win? Yes, he stood up to having his lyrics changed. Which, when you think about it, in addition to being a bold move for Cui, was a ridiculous request in the first place: The newest of Cui’s material was released in 2005 on Show You Colour; the newest song I know was unveiled at 2007’s Beijing Pop Festival (“Outside Girl,” which featured, in an extremely un-Cui fashion, a smattering of English lyrics). The one thing that Cui fans do is sing along; a lyrical change—and the request therefor—would be met with a mixture of anger and a realisation that The Man felt threatened. And that latter realisation is important: Look at what rock and roll lyrics can do to people in power!

Seems to me that heaviest on Cui’s mind is the lost opportunity to bring his Long March directly to The People. Thus does yaogun lose. So do The People, who have yet to have yaogun spread to them.

But, on the bright side: Cui’s been marching for thirty years, and shows no signs of slowing down.