Five years ago, on April 9, 2009, we lost one of the great English voices of Chinese rock: Ian Sherman, who succumbed to the cancer he had been fighting—and about which he had been writing—for just over a year.

I think it’s fitting that my five-year anniversary post comes in a few days after the actual anniversary. Not because Ian was ever missing deadlines, but because his writing wasn’t concerned with anything so pedestrian as surface details. It was the experience of the thing in question. It’s not the date: It’s what happened.

END_OF_DOCUMENT_TOKEN_TO_BE_REPLACED

Fans of This American Life were treated to a bit of China this week, with an episode entitled “Americans in China.” With that in mind, I figured I’d drop a little piece of my own China experience; an article that the Globe and Mail published back in May of 2005. Literally every foreign musician playing in China will have similar stories.

This is one of those stories.

END_OF_DOCUMENT_TOKEN_TO_BE_REPLACED

As a former foreign resident of the Middle Kingdom, it was both shocking and unsurprising to hear the number 594,000 bandied about, in this post on the China Beat (yes, that is the site you know from its posting of an excerpt-plus from Red Rock as well as a range of great and insightful readings on China), about how many non-Chinese, in 2010, called China home.

The number is both higher than I thought and lower than it ought to be, and the article points out several reasons this is so. The visa situation for many non-Chinese residents, which is perhaps best explained by evoking the colour grey, means that many foreigners are not exactly counted in official stats. Compounding that situation are the periods of regulatory, erm, adjustments that tend to follow periods of Special Events — say, the Olympic or World Expo periods. But on the other hand, anyone that’s lived in China for an extended period of time knows that foreigners can’t truly live under the radar.

Alas. There are foreigners, a whole bunch of them. And, to turn things, as we often do, back to Red Rock: The Long, Strange March of Chinese Rock & Roll, as long as there have been foreigners, they have used their devilsh ways to spread gospels of many kind, rock and roll being only one of many recent such gospels. There have been many unsung heroes, bringing their collections to the hungry ears of local audiences and several important figures who brought not just the sounds, but the actual artists into the country desperate to experience for themselves the music. And, of course, there have been players.

And so, a brief look, at some of the laowai (“lao [rhymes with ‘how’] why“, literally, ‘old outside’) inside yaogun:

If Cui Jian is y 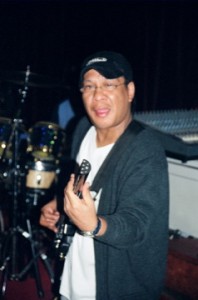 aogun’s Adam, Eddie Luc
Lalasoa Randriamampionina isn’t Eve, and he’s probably not the snake, but he’s definitely one of the other residents of the Garden. Since the earliest days and right through to today — unlike any other musician — Eddie has been alongside Cui, making him the most famous foreigner in yaogun, and one of the most famous foreigners in China. He also played for legendary blues crew Rhythm Dogs as well as the amazing Nogabe, in addition to early band Ado (which became Cui’s band from early one).

One of the first alt bands to come out of Beijing was Xue Wei, a band about which little is known, other than they had a big fan in Cui Jian who told a reporter that he wished the 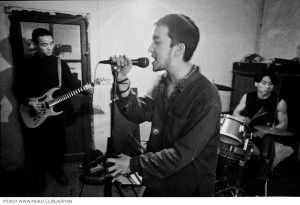 y’d play more. Scotsman Colin Chinnery, maven in the contemporary Chinese art scene as both artist and curator, led the band (and is pictured at right). Check out their tune, “Trivial” (微不足道), streaming here.

Thin Man has established itself even into the mainstream, but in the band’s earliest incarnations, Chandler Klose played an essential role; he and still-frontman Dai Qin formed the band, and it was Klose that brought Dai, who had only just discovered the Beatles (and was playing in one of the early-nineties party scene’s favourite bands, which became known as the Mongolian Beatles) under the spell of the alternative music only recently dominating the American rock scene. Klose also played alongside Zang Tianshuo (soon to become a pop star) in the band 1989, but left it for Thin Man. Here, the band’s contribution to 1994’s Original Chinese Rock compilation, “Passed this Place”

P.K. 14 remains atop the yaogun heap, even nearly 15 years after their formation. Soon after Yang Haisong and his now-wife Sun Xia moved the band to Beijing to break into the then-nascent but bubling scene, he met Swede Jonathan Leijonhuvfud, who had brought punk bands on tour through the mainland from his base in Hong Kong. Like Yang, Leijonhuvfud discovered that Beijing was where it was at, and moved there in 1999, joining the band soon thereafter.

Leijonhuvfud also makes an appearance in the short-lived Cocktail 78, which united he and future FM3 co-founder and Buddha Machine co-creator Christiaan Virant with two members of Brain Failure, Xiao Rong and David O’Dell (author of the recent memoir Inseperable, about the punk scene in Beijing) and Jerry Chan, who recently posted a link to not just video of the group performing (sans Chan) at the Great Wall, but also a sample of a track the band recorded in-studio in 2000

Beginning in the early aughts, bands with members from outside of China were less rare: There were more spaces to rehearse and perform and there were exponentially more of us. And we got around. Which doesn’t mean that your humble narrators two most recent bands are unworthy of mention here…

Black Cat Bone, still going despite my departure (as well they should be), formed in 2005ish, is a blooze band of the party-with-us variety.

Finally, RandomK(e), a dark space-post-indie rock band formed in 2005 and disbanded in 2010 with, alas, my departure.