Seems that this blog will alternate through time. We started at the beginning; we now continue to the recent present. We will thusly hop around for the foreseeable future.

Radiohead opened an account on the Chinese microblogging site, Weibo.

If it’s actually Radiohead (an enormous “if”), nine days after posting “testing the weibo”, they have 67,500 reasons to post something more. If it’s not Radiohead, which is a distinct possibility (nothing more has been posted as of now, other than just about 4600 comments from fellow weibo-ers), they might want to consider joining the fray.

The Guardian asked what I thought, in this article, which ran on July 6, five days into Reibohead.

If any band can attract a loyal, hip, intelligent and savvy group of netizens to help their cause, I told the paper (the ’cause’ being accruing interest in a China tour, or of record distribution, rather than, say, freeing political prisoners), it’s definitely Radiohead. They could, I continued, employing the kind of subtlety and reasonableness much-needed in our over-hyped world, be kings of the virtual world.

Of course, it’s unclear if they opened the account at all. And if they did, whether it was done with an eye to performing, or just, you know, to “test”.

Their politics are what everyone’s talking about vis. China, which is reasonable, especially if the idea is to post on weibo the kinds of things they’ve been posting in other forums — which they won’t be able to do.

It’ll be a long time before the group gets permission to play in China (and before that, it’s arguable that the country isn’t ready, technically, for what that would entail). Certainly playing for/supporting/encouraging support for, say, an ethno-religious group headed by an elderly monk in a small Indian mountain town isn’t the kind of thing that looks good, in China, on a resume. Forget the permit-issuing authorities; it’s not likely an application would even be submitted (even if presenters could afford the fee or get specs up to snuff). Sinologist Perry Link talks about censorship in China as the “anaconda in the chandelier”: The snake will generally leave you alone, so long as you don’t poke at him. Radiohead, in this scenario, is the big, long stick.

Like most bands, whether or not they know, tried or cared, Radiohead does, in fact, have something of a presence in China already, via, first, dakou, or ‘saw-gash’ tapes and CDs: 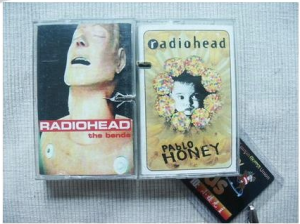 …and later, thanks to file-swapping, p2p-ing, and the fact that in the post-OK Computer world few rockers or fans would not be aware of or attentive to Radiohead, whether in Beijing or Brighton. And, of course, there’s “indie”  labe

l Modern Sky, who snagged the rights to Kid A a million years ago (2001) and (officially) distributed it in China. (one is hesitant to add that they did so well with it that they never distributed another Radiohead record again, though their catalogue does still include the occasional overseas record.)

Unlike most bands, though, Radiohead has been a major influence to a large number of Chinese rockers: There are few yaogun bands active or formed in the last decade-plus who don’t cite Radiohead as a major influence (not unlike the situation in many parts of the planet).

Also unlike most bands, Radiohead is well-known for a vision of the music biz that is similar to their conception of rock and roll: Their strategy for releasing In Rainbows (ie: pay what you want) seemed just as off-the-charts as what their brand of rock and roll created in each album since OK Computer.

China is a place where models of any kind tend not to work, so a band that is up for anything — not to mention creative about approaching the ten-tonne behemoth known as the music industry — is a perfect match for the Wild, Wild East.

Imagine if Radiohead actually set up the weibo account, and if it signals that the band is ready to seriously consider China. They could, like Linkin Park, make a real impression (LP were fortunate to have Huang Feng on their side building serious traction in-country in the days before weibo, douban and the million o

ther platforms part of the new normal). There is much to learn from LP; as much about finding success as avoiding failure: The recent hugging/high-fiving the band didwith a certain elderly monk seems to have slowed that train’s return trip to China, but the point is, Team Linkin spent a good amount of energy building a real presence, and it paid off nicely until things went pear-shaped.

Which is the other point: Real investment in China requires a full-on effort and an outlook that goes far beyond scheduling. Which doesn’t mean bands that want in to China need to drop causes, shut up and play. It means they have to know what the investment in China involves.

So let’s say Radiohead is weibo-ing. Let’s say they get a few zillion more followers. They might well become invested in the country, proving their commitment not to the sales of billions of records but in the healthy development of an industry that is, to put it kindly, still finding its feet. There are two ways to look at the music business in China (like so many other industries): One: It’s a complete mess. Piracy is rampant, censorship is difficult, apathy is widespread. Two: It’s a clean slate. Everything is brand new. Nobody’s been doing anything for very long, so the potential for change is so huge.

Radiohead didn’t have a clean slate upon which to write the rules to their recent releases, but it sure seemed like they did. Imagine what they could do with an actual clean slate.

Let’s be clear: It’s not that Radiohead will be the tide that rises all ships on the storm-ridden and pirate-infested Chinese market. But a real involvement could certainly make others stop and rethink strategy, both inside and outside the country.

One yearns to bring this all back to Red Rock, that much-anticipated book now less than three months from international release. One can. Because Radiohead’s earliest imprint in China was made in the wake of Pablo Honey and the song “Anyone Can Play Guitar”. Influential radio DJ Zhang Youdai named his short-lived program (1994-1995) took the name and under its banner brought axemen into the studios of Beijing Radio to teach tunes to listeners. Many a young rocker snuck headphones into their extracurricular classes to listen in on those lessons. 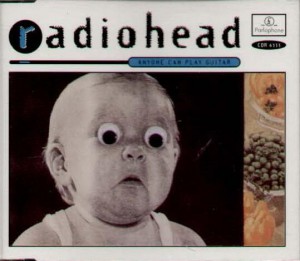 Yang Haisong, the singer of post-punk outfit P.K. 14 and a major figure in yaogun, told me that among his crew, “Anyone Can Play Guitar” was more than just a song. It was their mantra and guiding philosophy. “Grow my hair,” Thom Yorke sang. “I wanna be wanna be wanna be Jim Morrison”. It sounds cheesy, and maybe he was poking fun. But when you find out that yaogunners were longing for the excitement, action and promise of America’s sixties to lift them out of the angst of China’s nineties, and that they believed they found it in rock and roll, it takes on a whole new meaning.

It was more than a rock song: It was the impetus for a life-altering decision, one that separated you from 99.9% of the world as you knew it. You couldn’t just grow your hair until the late nineties; those locks marked you as a rebel of a kind that those of us in rock and roll’s homeland couldn’t imagine.

“I wanna be in a band when I get to heaven,” went the song. When young ‘gunners heard that, they took it to heart, and you can hear it in the best of the music they made.