As you have likely discovered, there is a whack of information and fun at jWc.com, including timelines, mixtapes, notes on and addenda to Red Rock: The Long, Strange March of Chinese Rock & Roll, and much more.

The Bonus Tracks section is, now, complete: Six chapters’ worth of notes of a multimedia sort to both enhance and encourage the reading experience. The Liner Notes, more source-material-type material, has long been up and you’ve all already noticed that, surely. 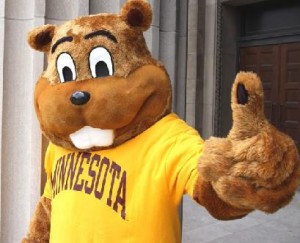 Red Rock: The Long, Strange March of Chinese Rock & Roll is, officially, a textbook. But in a good way. Because if you’re going to be told what to read, it might as well be about the adventures of yaogun. University of Minnesota students taking Professor Jason McGrath’s ALL 3337 Chinese Literature and Popular Culture Today are among the first to be forced to read Red Rock. Go you Golden Gophers!

Other things to look out for…

jWc will appear on Fairchild TV‘s Leisure Talk program, for those in Canada with access to the channel and interested in hearing jWc blather on in Mandarin. Airdate is Monday, Feb 13, check their listings for the scoop.

jWc will appear, in person and in English, around Toronto in the near future:

On Thursday, Jan 26 at 7.00pm, University of Toronto’s Pan-Asia Student Society presents a Pan-Asia Cultural Showcase: A Night to Celebrate Diasporic Arts in Music, Film, Dance, & Literature. jWc has been asked to address the gathered masses at Hart House’s Music room: All the details are right here. 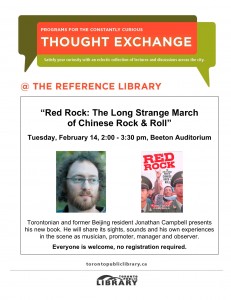 At the Toronto Reference Library‘s Elizabeth Beton Auditorium (789 Yonge St, just north of Bloor), speaking, in his most romantic tones, on Tuesday, Feb. 14 at 2.00 pm. Is there a better way to say ‘I love you’ than with yaogun? (No, there isn’t.)

Stay tuned, also, for more Red Rock–related news in the near future.