In the hours leading up to Red Rock‘s Toronto launch on SATURDAY MARCH 24 1-4pm at the Gladstone Hotel (and at Facebook, here), herewith, a rundown of the not insubstantial, if we do say so ourselves, recent coverage the book has picked up:

An audio interview recorded after a talk to the Shanghai Foreign Correspondents Club on Forbes Magazine’s website.

Bookclub In a Box talks to jWc.

Open Book Toronto on jWc’s workspace in the “At the Desk” column.

The Toronto Reference Library blog’s detailed yaogun 101 entry in advance of jWc’s talk there in February.

An account of jWc’s talk at the Toronto Reference Library at Other Peoples Books.

See you at the Gladstone Hotel, Toronto-based yaogunners!

In their February issue, the Village Post, a paper distributed through the Greater Toronto Area, ran an interview with yours truly on the occasion of the upcoming Red Rock Talk at the Toronto Reference Library. The long, strange march through the author’s hometown begins…. 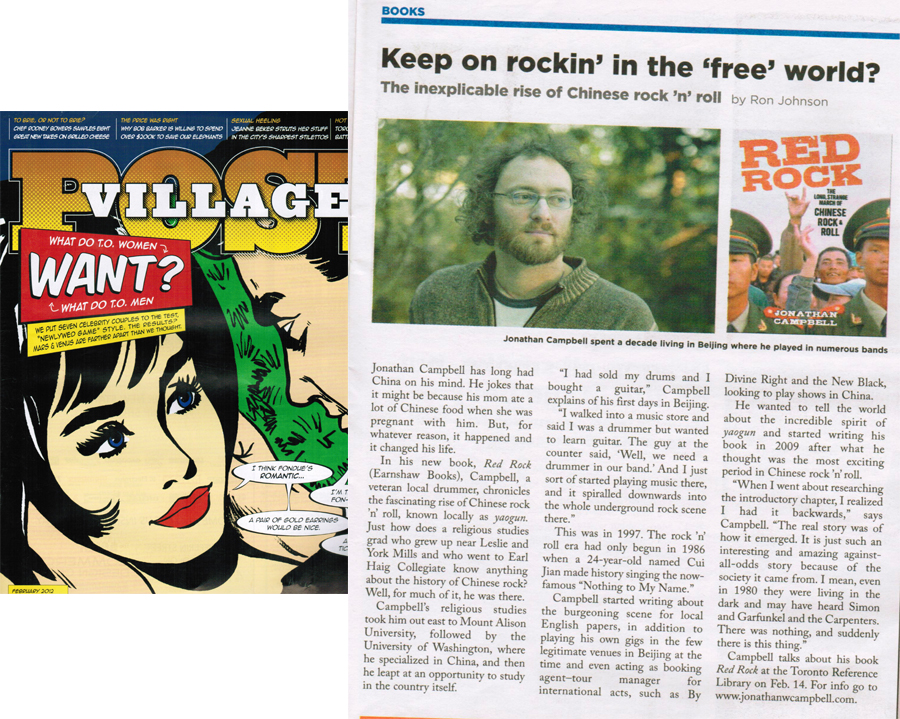 So Maclean’s magazine just ran a story on one Canadian effort to bring its music industry into the Middle Kingdom. Yes, yours truly was quoted in the piece, but it sheds light on an important, if small, idea. We can talk (and write) about China’s musical output and of the international bands performing there, but there is something lacking in all of those discussions: China’s music industry. The industry in China is even newer than the music, and it’s currently in a strange place: Like so much of the country, the music business is playing catch-up with the rest of the world, squeezing into a few precious years the study that has taken decades in the West.

Combination music festivals and conferences are long-standing traditions in much of the world, where industry folk hobnob, make deals, talk to eachother and, often times, listen, about the issues facing the ‘biz with regularity. It’s a great way for artists to be seen by the Industry and, when done well, it leads to more opportunities for artists and businessfolk alike.

But there’s been a real lack of Chinese presence at these events. MIDEM (in 2008’s installment, China was country of honour) and Canadian Music Week, the Cannes and Toronto events, respectively, have had some luck with Chinese presence, but they are the exception rather than the rule. Not that China isn’t a subject at these conferences — it often is. There just aren’t many representatives from the country there to be involved in the discussion. And that’s a problem.

I was one of six invitees to comprise a panel at 2007’s South by Southwest Festival on the Chinese market. None of us were China-born. It was hard, organisers told me, to convince Chinese music folks that it was worth the investment of the plane ticket and hotel to show up because the potential delegates hadn’t heard of SXSW. By then, SXSW had long been the leading music industry (and music, period) event in the land, but the ignorance on the Chinese side of SXSW is totally understandable. But that’s not the only reason folks didn’t make the trip, because a little research would have shown them what they were missing out on. I believe, as I said in the Maclean’s piece, that there’s a sort of prom-queen-esque outlook where the Chinese know that everyone wants a piece of them, and they don’t need to engage to come upon opportunities (and, one might add, if they do engage, they ought to be wined and dined, and flown around to do so). At Oslo’s Oya Festival, where, in 2005, I was one of five Chinese delegates (I was the only non-Chinese of the bunch) invited, Scream Records’ founder and boss Lü Bo was swamped by all of the folks that wanted to work with him to the point that it caused him obvious discomfort. So perhaps that’s part of it too: Why make oneself available to all, when staying away can help whittle down the suitors.

Besides, the amount of music industry reps that have come through China on fact-finding missions attests to the fact that the world will come to China. Because, unlike (many of) their Chinese counterparts, a trip to China to scope out the music scene is worth the lark, even if no business is done, because of the country’s near-mystical allure. So the industry often comes to China. In forms like TransmitCHINA, the subject of the aforementioned article.

But before Transmit, it’s important to note, there were many other similar industry events. I have spoken at British and Spanish delegation meetings, and hung with a United Nations’ worth of industry folks who have come to China, with governmental help, on fact-finding missions. While observers (and participants) may question governmental involvement in junkets such as these, it’s essential to the process, because of the long-term investment required. Proof of the efficacy of this support isn’t in record sales or number of touring acts, or ticket sales: It’s impossible to measure, but it’s clear that countries like Norway, Germany, Denmark, France and Britain have made the most inroads into not just the Chinese market, but, more importantly, the Chinese consciousness.

There was the afforementioned Oya Fest’s 2005 festival that flew and hosted five of us at their festival, alongside Chinese garage-punk act Subs, in hopes of establishing relationships. France’s Year of France in China (2004) and Year of China in France (2005) had a strong musical element. The Norwegian embassy has long been one of the most active in getting artists into China, and their efforts are the reason that, when I took jazz bands into universities in far-flung cities, the students, teachers and administrators I dealt with already were familiar with the country and eager for more. Close observers will also note that Norwegian bands were the first international acts to be included in the Midi Music Festival, China’s best-known and biggest rock fest. Denmark’s SPOT Festival has invited (and flew) Chinese delegates (yes, including yours truly) to their event dating back to 2006 (and they had Wang Wen perform in 2008), and have sent a range of different folks — bands, techies and others — to festivals.

These are still baby steps. But they are key. China’s music landscape is the Wild East and more international industry events inside the country, and Chinese presence at international events, will help everyone navigate through.

Run, don’t walk, to your radios!

jWc will be on airwaves, bringing yaogun along for the ride, in Australia and anywhere Public Radio International programming is heard.

FRIDAY OCT 21 midday Melbourne time, I’ll be speaking with the good folks at Connect Asia. That’s soon, so hurry!
UPDATE: Here’s the link, for those interested in hearing that interview

FRIDAY OCT 21 at various local times, depending on your local station, Public Radio International’s THE WORLD program will run a chat that I had with host Lisa Mullins.
UPDATE: Here’s the link

Online listening goodness after the fact is a gift that keeps on giving.

Stay tuned for more. I can yap for EVER.

On Monday, September 26, at 12.30pm Eastern Standard Time, yours truly will appear on the That Channel’s show Liquid Lunch to talk Red Rock. Tune in, at http://thatchannel.com.