Kurt Cobain’s death didn’t do anything as grandiose as “galvanize” the Beijing rock scene (so don’t believe the hype), but it did certainly, provide an important marker at which like-minded mourners could gather and remember, celebrate, and rock. It seemed timely to revisit a recent piece I wrote on Nevermind.

As David O’Dell writes in his book Inseparable: The Memoirs Of An American And The Story Of Chinese Punk Rock, the second anniversary of Cobain’s death was “the first time our ears had ever heard Chinese punk rock.” Memorial concerts continue to this day. 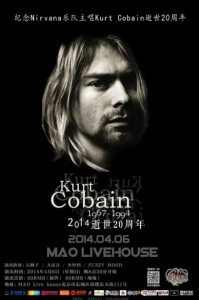 In 2011, the online magazine PopMatters delved into “Nevermind Nostalgia” on the twentieth anniversary of the album’s release, and I contributed a piece on the album’s, and band’s, legacy in the Middle Kingdom. Thought it might be high time to revisit it. Recall what was going on in 1991, or, three years later, upon Cobain’s suicide: the events of Tian’anmen Square (also celebrating a big anniversary this year) still relatively fresh in people’s memories; yaogun still a brand new phenomenon; the rise of the long-hairs and the dominance of the kind of metal and hard-rock that Nirvana at once loved dearly while, with their stripped-down sound, look and attitude, doing away with all of its pretension.