A mixtape, then, of some of the best use of traditional elements thus far.

As is often the case, we look to Cui Jian to start things off. While his best-known song, 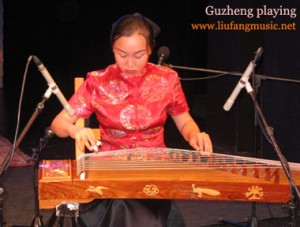 “Nothing to My Name”(see this post for more on that) employs the suona, a horn that seems a mixture of a clarinet (body) and trumpet (bell), we turn, here, to a later track. “Let Me Run Wild in the Snow” is off of his 1990 album Solutions. The featured instrument here is the guzheng (“goo-dzh-ung”), a zither that is most commonly-employed traditional instrument in yaogun. The guzhenger on this tune, Wang Yong, comes from guzheng royalty – his father was one of the most celebrated guzhengers in the country – and made a name for himself in the traditional music world before finding rock music. In the early nineties he began to experiment with MIDI technology when it was still brand new, taking his electronic music to Germany on the 1993 Chinese Avant Garde tour, and staying at China’s electronic music forefront ever since.

Fifteen years after Cui, the man soon-to-be-known as XTX, then known as Xie Tianxiao and Cold-Blooded Animal and formerly known as the frontman for Cold-Blooded Animal, put out the tune “Who Was it That Brought Me Here.” Soon thereafter, he added the guzheng in the song’s live version, and  I can’t help but hear more than just a bit of Cui’s song, above, in this version. X is currently known far and wide for his mix of guzheng and grunge – new genre alert: grunzheng, anyone? – and a healthy helping of reggae on top of that.

The current kings of Chinese reggae, L0ng Shen Dao (also known by the psychedelic acronym), share a guzheng player with XTX (who also plays guitar and guzheng in folk-rockers Buyi), and are led by bassist Guo Jian, who played with XTX (and is in the video above). “Wrap You Up” was recorded live for Mogo, a site with a warehouse of yaogun videos, live performances and interviews.

In 2004, Wang Lei had already chucked his alt past in favour of delving deeper into the dub he’d just discovered. His 2003 album, Belleville, was the result of an extended stay in the eponymous and multicultural Parisian neighbourhood, and the following year, he, along with a handful of other musicians, headed to France for a multi-band touring showcase called China Music Lab. Wang had a five-day residency at an Orleans club with live dub act Hightone. With yours truly by his side to help with translations (learning, along the way, that neither his Chinese nor his French was what it used to be) wherein they created a forty-five-minute set that they performed in Orleans as well as to a huge crowd at the massive Eurokeenes festival. “Kouai” is one of the songs off of their 2005 Wangtone album.

Rather than the guzheng of most yaogun bands, the Guangzhou-based post-rock outfit Zhaoze (click here for t 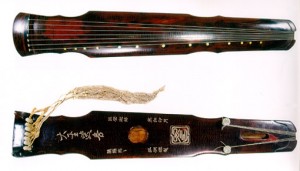 heir Chinese site where there’s more to listen to) goes back further for its traditional inspiration. The guqin (“goo-cheen”), one of the most ancient of China’s traditional instruments, is a seven-stringed harp/zither type of instrument that is said to be one of the hardest to master. Not only has Zhaoze mastered it, but they’ve made it seem like it was built for post-rock. “Cang lang shui yu you” is off of their late-2010 record, Cang Lang Xing. (New Year’s Eve 2011, they released 1911, which, from a quick first listen, takes their post-rock even further and deeper into outer space – in a good way)

Experimental duo FM3 are best-known for their Buddha Machine, an anti-iPod analogue device reminiscent of the hand-held radios of a bygone era, loaded with short samples of religious loops. In 2011, they asked a range of artists to create tunes using the machine’s loops and released the tracks on the album HeXieFu. Here, “Ben Sheng” by Zi Yue sees the band best known for their mixture of prog rock and traditional elements go furhter into the future than ever before:

Finally, in the not-quite-yaogun-but-worth-a-mention category is the collaboration between American singer, banjo player and songwriter Abigail Washburn (for and with whom yours truly has arranged and promoted many a China tour and concert) and the also American electronic music project Shanghai Restoration Project. The two united in the wake of the 2008 Sichuan earthquakes for the album Afterquake, which featured field recordings of children in ‘relocation schools’ singing traditional folk songs. Here, “Chinese Recess” features the innovative use of, among other things, a ping-pong game.