The iconic Ai image is of the man flipping the bird; now he throws up the devil horns, according to this BBC report and many other Chinese sources. 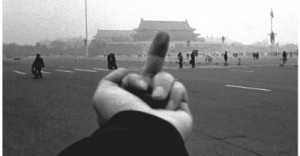 Working with his long-time comrade-in-arms, Zuxiao Zuzhou, Ai wrote the lyrics while ZZ took on musical duties. Strange, then, that metal would be the music that emerged, but, then, ZZ – aka “China’s Tom Waits” – does have a penchant for the out-there and off-kilter. Ai told the BBC that there are also “more punkish” and “more popish” tunes on the album, which he’s called Divina Commedia (神曲 shen qu), in reference to Ai’s nickname, “Ai God” (or ‘Divine Ai’ 艾神 ai shen) – and, as it happens, a perfect name for a heavy metal album.

Two songs, we’re told, are about blind lawyer-cum-activist Chen Guangcheng: “Climbing Over the Wall” and “Hotel Americana” refer to the lawyer’s flight from house arrest and asylum in the US embassy, respectively. This is Ai’s first time on the mic, an effort he says was inspired by the guards charged with his nearly-three-month detention in 2011, who kept asking Ai to sing. Ai realised that he only knew the Peoples’ Liberation Army songs, and knew he had to devote himself to music upon his release.

And devote himself he has: He’s already announced that he’s at work on the follow-up record.

No word yet on where to hear a sample of the upcoming album, but with the release date slated within the next month, be sure that there will be plenty of opportunities to hear it. Stay tuned for details.