So yaogunner number one, Cui Jian, and Scottish musician and producer Howie B get in a Masarati and drive across Italy…

I don’t have a punchline, but I can present the 11-minute short film (see below) directed by fashion photographer Fabio Paleari, and three on-the-road videos chronicling the duo’s adventures and 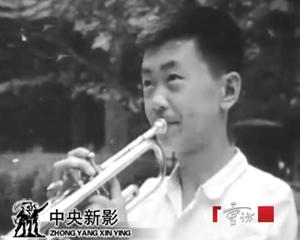 philosophical discussions across Italy, with stops at a winery, a villa, the Venice Biennial (and chats with Chinese participants) and more. Hints of a song that the two create together—featuring Cui on the instrument that started his musical journey, the trumpet, Howie B on the piano, along with bassist Gianni Maroccolo and guitarist (and actress, best-known for The American) Violante Placido—are woven through the films, though what would be best is to hear the track in its entirety. What one gathers from the snippets we are granted is a minimal tune, a potentially heart-achingly pretty tune and one that Messrs B and Cui seem to be very excited about. Alas, where it lives in its full and final version, is unclear.

It’s an ad campaign created for the Italian car manufacturer and Chinese luxury travel site Zanadu.cn that takes its title, On the Bridge to Nothing, from Cui’s most well-known tune, “Nothing to My Name” (see below for more on that song). One might pessimistically look at such an overtly materialist project as anathema to the legacy of the song, and of its creator, but Cui is on that. In addition to much anti-materialism and -capitalism talk throughout the films, Cui outlines his view of the project: The song, says Cui, “sounds like it’s against materialism. That’s why it’s called ‘Nothing to My Name.’ Now here I am in the capital of materialism. I have to announce that I’m not here for shopping. I’m searching for the void in my heart. I am ‘Nothing to My Name.'”

The project’s site, where the short films are collected, is here.

And, in other CJ-Italy news… Cui, alongside Robyn Hitcock and Garland Jeffreys, picked up the Premio Tenco award, an Italian songwriting prize given annually since 1974, honoring songwriters who have made lifetime achievements to the craft. In celebration, Cui performed a few tunes; below, “Nothing to My Name” bilingual-style, with Italian songwriter Francesco Baccini.