Yaogun yucksters Second Hand Rose have a big show coming up: They’re bringing their Chinese-opera-folk-comedy-tinged rock to Beijing’s Workers’ Gymnasium on December 7. The stadium, which has hosted, among many others, Bob Dylan, Deep Purple and 2HR’s fellow yaogunner Xie Tianxiao (aka XTX), holds upwards of 12,000. So big is the upcoming show that the band has, in the lead-up to the big event, produced not just a promo video, but, looking to Serve the People, produced some helpful how-to’s. 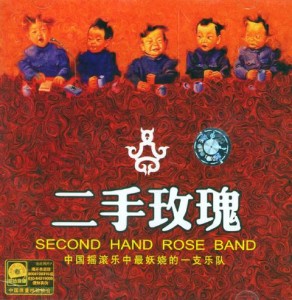 Careful observers may note the importance of a quote that proves central, too, to the work of your humble blogger. “Buddy, what the heck are you playing rock for?” (“大哥儿你玩儿摇滚，你玩儿它有啥用啊?”) opens not just the band’s first, self-titled album (which you can hear on the band’s site) but also kicks off Red Rock: The Long, Strange March of Chinese Rock & Roll, and provides the Workers Gymnasium concert’s theme: “Useless Yaogun” (摇滚无用). Official video for “Trick” (伎俩), the song from whence comes that line:

Should you be looking to head to the Workers’ Gymnasium to catch the show, or should you be curious what one ought to know in advance of doing so, you might want to study up. 2HR is here to help:

Lesson two aims to teach the People to sing along.

Lesson three: Do a little dance.

(Check in with the band’s Facebook page for more updates)