Spring Festival, aka Chinese New Year is upon us. The first day of the Year of the Horse is January 31, which means that on the eve of January 30, a ridiculous number of people will be in front of their television sets, en famille, to watch the always-extravagant and never understated New Year’s Gala (春节联欢晚会). Broadcast on China Central Television, the massive event is something akin to the Superbowl Halftime Show meets Dick Clark’s New Year’s Rockin’ Eve by way of Jerry Lewis Telethon and American Idol finale—only bigger. Sketches, musical performances, comedy routines, celebrity appearances and more ring in the new year as only Chinese variety-show television can. Recall, when you imagine the scale and scope of such a performance, what Beijing did for the Olympic Opening Ceremonies in 2008, and you start to have an idea of what it all looks like.

Though there is nothing that could be less yaogun than the Gala, there are hints that this year’s gala just might get a little dose of rock and roll.

Word has spread that Cui Jian, the inventor and symbol of yaogun has been invited to attend the Gala, which has, in past years, seen Celine Dion, Jackie Chan and the top names in Chinese comedy, pop and performance. “When asked if Cui had received the invitation from CCTV to perform at the gala,” says the Global Times, the response from Cui’s manager was as cryptic as it was revealing: “‘you could say so.'” 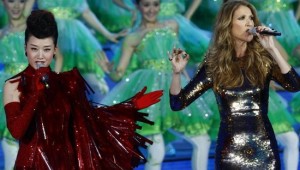 That response, and the clearer one she gave to the Associated Press (“We’ve received an invitation from CCTV for Cui Jian to perform at the gala”) launched a million reports on how Cui has gone from Tiananmen voice to Central-Television star, and how rock and roll is starting to break into the mainstream.

The question here is: What’s more yaogun: Turning the invite down, or taking them up on 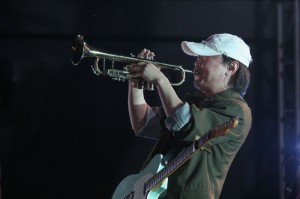 it? Obviously Cui has proven in the past that he’s up for it. While it has certainly earned him criticism, his philosophy is to engage with as large an audience as is humanly possible, to convert the masses to yaogun. You don’t name an album Rock and Roll on the New Long March without making it crystal clear that your March includes a Mission. But looking back at Cui’s experiences with this most mainstream of mainstream, perhaps the more pertinent move would be to say ‘thanks but no thanks’ lest he, again, be cut from the broadcast.

This is not the first time that yaogun, per se, has been in on Spring Festival festivities. Last year, Wang Feng performed on CCTV’s Gala, and while he hasn’t exactly been a shining yaogun example, he does have serious pedigree. Fronting the late-nineties rock act 43 Baojia Jie, he quickly went on to solo fame. His latest source of fame is his role as a judge on The Voice China. Critics, yaogunny and not, point to Wang’s 2009 album, Belief Flies in the Wind (信仰在空中飘扬), as a great rock-pop crossover. Alas. As Beijing Cream pointed out Wang Feng isn’t exactly playing your grandad’s rock and roll (unless that’s exactly what he’s playing). But he is employing the language and symbols thereof.

For Cui, meanwhile, this is not his first time invited to the New Year’s dance. The New York Times reported that Cui not only received an invite, but recorded a session for CCTV in 2012. While it wasn’t for the official Big Show, it was for a sister-show to run alongside the Big One; it was the first time CCTV tried out what they called the Internet Spring Festival Gala, whose aim was to “attract netizens who perhaps prefer being glued to their computers rather than the TV.” It was to feature videos, blogs and interactivity (Also in the works was a Rural People’s Spring Festival Gala, ostensibly to attract the exact opposite demographic).

Alas, the segment that Cui taped for CCTV was not, in the end aired. But in Hunan Satellite TV country, yaogun made the cut. The network perhaps best known for first pushing the envelope by broadcasting Super Girl to the outrage of wizened cadres and delight of giggling schoolgirls, held their own New Year’s Gala, and invited Cui Jian to perform a couple of number. In the video, below, the segment begins with a band fronted by Paul Wong (Huan Guangzhong), who rose to fame with the Hong Kong pop-rock band Beyond, before Cui and his band perform “Fake Monk” (假行僧) and, along with Wong, “Do It All Over Again” (从头再来). Both Cui tunes come from his 1989 album Rock and Roll on the New Long March—the album wherein lies the song that everyone is hoping he’ll play on CCTV, should he accept the invite, “Nothing to My Name” (一无所有). Note that Cui ends the performance by saying that “Rock and roll will never end” (摇滚乐没有末日): He knows he has precious seconds to speak, and he uses them carefully.

The answer will emerge in the coming weeks as to whether Cui will join in the New Year’s craziness. In the meantime, here’s what it looked like in 2013, on Hunan Satellite TV (apologies for the commercials embedded therein); the clip starts with Wong’s tune before the two-song medley from Cui and crew.