In the punk section of Red Rock: The Long, Strange March of Chinese Rock & Roll, I look at a few tunes that exemplify one of the rockinest tools in the kit, the count-off. The one-two-three-four has been employed in the service of great music from the get-go. A good one sets the stage, a Great one does that and more. Yaogun’s count-offs are no exception, so here’s a countdown of count-downs. One of the slowly but surely growing number of mixtapes at jWc.com features the following mix, but herewith, an extended look at the tunes.

“Rock and Roll on the New Long March” by Cui Jian, from 1989’s album of the same name. The first song on yaogun’s first record, the second major stop on yaogun’s Long March (the first being the one that Cui took three years prior when he introduced rock and roll to the masses with “Nothing to My Name”). The March is laid out musically after a brief, not-quite-marchy intro: With the snare drum guiding the way, Cui counts off not just the lyrical introduction, but his nation’s introduction to the long march ahead of it. Chorus-wise, a second count-off, and one that goes to what seems like the odd choice of seven. But it’s a number that works in the context not only of this song (“one-two-three-four fiiiiiiive, six, seven”), but in the echoes of drilling squads and exercising citizens across China, whose knee-bends and toe-touches happen to the count of seven, which rhythmically, in Chinese, makes not only great sense, but great rhythm. It’s one of those songs that creates a complete picture: He’s not just singing about a march; he’s singing a march. This live version is from 1992:

“Down”, Subs, from 2006’s Down. Wherein Kang Mao takes the verbal abuse of her father and turns it into a creedo for rock and roll survival. “My father,” she says when introducing the song live, “told me that I have ‘three No’s’.” Choosing rock, she was told, meant no money, no family, no job, no future. Instead of seeing that as a problem, Subs celebrates it, and the rock and roll life in general. When she asks the crowd to join in, the choice is celebrated as communal and adds another layer to the whole thing.
“Down”, live in Shanghai in 2009: 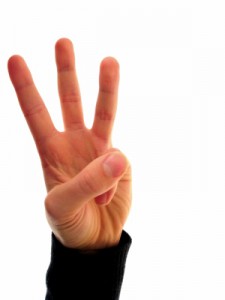 “I Want Beer”, by Joyside, from 2004’s Drunk is Beautiful. A count-off – and, one is quick to add, band – of a very different kind.  As quickly as it takes to get from the “one” to the first millisecond of the word “three,” singer Bian Yuan’s digestive system takes revenge and his opening call sinks like a blimp with a fast leak: “ONE! TWO! sr—(gulp-belch)” is what comes out, and you feel the discomfort of what sounds like it might be day-old beer, but we’d know better than to expect there was any alcohol that old in the vicinity of this band. Joyside does for booze what a band like Anarchy Jerks did (and Misandaodoes) for Oi!, namely, abuse the hell out of it.

“Bastards of the Nation”, by Demerit, from 2008’s Bastards of the Nation. A mood-setting count-off if there ever was one. Singer Li Yang lets forth a growl from the depths not only of his soul but of places one oughtn’t ever reach. Like Bian Yuan, Li forgoes a number, but unlike Bian, it’s on purpose – and with purpose: ‘Four’ becomes a ‘fuck you’ whose ‘you’ is a long drawn-out scream that lets us know that whoever ‘you’ is is either lying, heart beating its last, blood pouring forth, dead on the floor in front of Li, or will be in the very near future. Demerit is the kind of band that means business in a way that inspires not just fear, but respect.