In a happy new year move from an element of the Chinese music community, a track to celebrate the upcoming Year of the Dragon in a style dear to those of us, in the West, with fond memories of Band Aid and its international brethren and sisterians as well as those familiar with China’s own take on the phenom in that group’s wake. 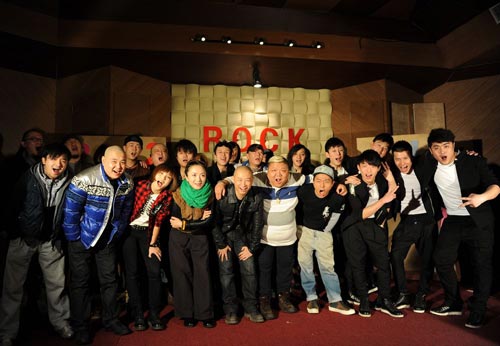 Seems that over thirty folks got together in a studio to record “Rock 2012,” calling the song the Third Annual Yaogun Spring-Festival Theme Song Recording (though the word ‘yaogun’ might be better, here, translated at ‘Rock and Roll’ particularly based on the song lyrics, see below). The last time folks came together under such a banner was for a concert at Beijing’s Olympic Stadium last January featuring an even wider group of groups. This year, in addition to the concert, a song.

Sure, they’re not going to feed the world – heck, they probably won’t be able to feed Sun Jie, the most enormous one in on the recording (who is oft found manhandling a keytar in his aptly-named group Big Man 大块头 whose members are each no less than 220 lbs, though this video questions their hiring practices, assuming bassists, too, must meet the requirements) – but it is a gathering in the service of happy- and rock-ifying our new year.

As a person who was careful about assigning different meanings to “rock” and “yaogun” – in short: the former comes from the West, the latter comes from China, though not all rocky music made in China qualifies – it’s interesting to note that the singers here only refer to the English word for rock and roll. My quick translation of the chorus:

I struggle with yaogun, and with China, and with China’s attitude and behavior toward yaogun, and this video is a good example. On the one hand, there’s a lot not-quite-rock about it. The folks involved, like the kiddie-band, and the sprinkling of popstar-types. The tune itself sounds like one of those “rock” songs a room full of executives might’ve written by committee and focus groups: ‘Ooooo! Don’t forget the traditional-music breakdown section,’ one says. ‘Right, that’ll test well with the older folks. And also we should totally bring down the music like halfway through and dramatically, slowly, bring it back in after a bit of that soft-singing,’ adds another. ‘Oh, and don’t forget that thing where you make the song suddenly go up higher, like a step,’ someone else chimes in. ‘That’s where you’ll get shivers!’

If the poppy participants and elements were cringe-worthy, the yaogunners among the ranks were nearly shocking: Lei Jun, of Oi!-punks Misandao, who is not the only bald one in the video, but is the only self-described skinhead, for one: There is footage from this flick of the band’s somewhat regular trips to load up on cough syrup to fuel the night’s shenanigans. I see Gao Hu of Miserable Faith, Xiao Nan, the venerable co-founder of Cobra, who was one of the stars of the nineties’ yaogun scene. And a few others.

But in yaogun’s, erm, long, strange march to something less than a hated and sometimes feared thing that needs to be stamped out – or worse: ignored – it’s stuff like this that helps it along. Pop is not necessarily the enemy, especially as a means to an end. Yeah, the poppers make it look bad, and the music here isn’t what you’d call epic, but pop is the quickest, best, and, really, only way to the ears of the masses. We just hope that the masses take to rock. And that these folks go from “singing rock and roll” to living and creating yaogun.

Since we’re at the beginning, why not start from yaogun’s beginning. Cui Jian kicked off yaogun when he performed “Nothing to My Name” at the Workers’ Stadium — and on nationwide television — in May 1986 (There’s a voice-over, and the action cuts out early, but surely you get the gist):

But what might just be the most entertaining aspect of the whole yaogun clock is that it came amongst the Hundred Stars’ wanna-be “We Are the World” extravaganza, “Let the World be Full of Love”, in which a Cui Jian of a very different kind appears at around 13.05, when he steps to the mic and “sings” words that were never were truer: “The world is changing/It only longs to never change”.