Earlier this week, I found myself talking Red Rock in front of a couple of academic audiences — my first two since the book’s publication. First stop, St Marys College of Maryland, where a great group of folks gathered thanks to the efforts of Professor Gong Haomin, for what I learned would be the first of many visits in a series of talks on Asian popular culture. Despite its tiny size (around 2500 students, I’m told), St Marys has a popular Asian Studies program — not to mention upwards of 25 Chinese exchange students and even a visiting Chinese scholar or two, several of whom turned up for the talk. One exchange student wondered if he’d see me perform at Mao Livehouse later in the year when he went home for a visit (I told him, unfortunately, that wouldn’t likely happen).

Next, The College of New Jersey, where Professor Mi Jiayan teaches a course on Chinese rock. Professor Mi had got my whole road trip into gear by connecting with me via Facebook, a fact that I’m still more than a little surprised by, and had begun the adventure suggesting that I speak to his class. But within weeks, he’d built a symposium, and I suddenly found myself a part of a four-person panel, alongside a poet (Huang Yibing) a Chinese film scholar (

Sherry Ying Xiao) and an American producer (Matthew Corbin Clark). Huang talked about the poetry, or lack thereof, in yaogun; Ying spoke of Cui Jian and Beijing Bastards, yaogun’s first flick; Clark talked about his experience with Cui Jian and recording the compilation Beijing Band 2001 — an album, he told us, that’s about to get a sequel. I spoke about the last ten-odd years. A special guest, businessman, scientist, Cui Jian fan, Yingchao Zhang, performed a couple of Cui Jian tunes (“Piece of Red Cloth” and “Greenhouse Girl”) on guitar, harmonica, bass drum, hi-hat and vox — simultaneously. Sichuan food and general merriment followed. Photos from the event, many photos of the event, care of Professor Mi, are all over Facebook. The class has just finished their Zhang Chu unit and are heading into the new millennium now, and even as I type, I can’t believe that that’s what they’re studying, but it’s fantastic.

Two folks from my past came out for the trip: My former professor, Jerome Silbergeld, who now teaches at Princeton, first introduced me to contempo 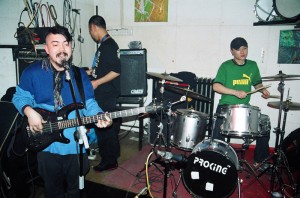 rary Chinese art via his film class and seminar on the extremely important exhibition Inside Out, which traveled through the US in 1998-1999. And Liangzi, shown here, in 2004-ish, with his amazing bass-fueled Primus-esque trio Ping Pong Party, who I hadn’t seen since he relocated to New York, where he now lives, upwards of five years ago. Also along, and, as usual, filming, was Victor Huey, who has been wielding a camera around yaogun since literally day one.

In other academic news, Red Rock may well be appearing on a syllabus near you. A couple of schools have expressed interest, and it goes without saying that I’m perfectly willing to slap a couple elbow pads on my blazer and hit the road to follow it all up. Stay tuned for news on that front…