Is it just me, or are we seeing, lately, a sudden increase in Rock and Roll with capital aarrrrrrrr!s? (UPDATE: Turns out, it’s not just me; it’s other folks, like, oh, the New York Times for example) Rock seems to be doing more – or, if not doing more, gaining attention for what it’s trying to do, and what it Stands For.

From Indonesia to Russia and Uzbekistan, rock and roll is making itself heard, and, though it’s meant hard times for those who rock, on another level it’s a great thing to see.

I was just tipped, by none other than international punk expert Luk Haas, about the goth scene in Uzbekistan and the persecution they face.

We heard, not long ago (and commented), on how Afghans were seeking solace in what a June, 2012 report calls “heavy metal rock” (sic – and come on!).

In Aceh, Indonesia, punks were forceably detained, shaved, “cleansed” and more to cure them of their so-called “social disease.” Reeducation, says the deputy mayor of Banda Aceh, will help them “wake up.” Unsurprisingly, many international punks were moved to actions of various kinds including a documentary in the works on an Indonesian punk group and the movement.

Most recently, Pussy Riot has been the subject of a large amount of attention since the Russian punks-cum-performance-ensemble were jailed for “violating public order” with their performance in Christ the Saviour Cathedral in Moscow.

The international community has been up in arms (even MDNA has chimed in, sporting “Pussy Riot” graffiti on her back at a Moscow concert; Public Enemy’s Brian Hardgroove and Blues Traveler’s Jono Manson wrote a song; and China’s favourite Icelandic Pixie Queen, Bjork, has expressed her desire to perform what is surely China’s favourite Bjork tune with the band, and there is more); through the trial, the trio remained, if not optimistic, then certainly in good spirits – the trial was being blogged about in realtime here.

(Highly recommended, for great contextualization, is WNYC radio show On The Media‘s interview with the editor of GQ Russia, Michael Idov.)

And wouldn’t you know it, the group happened to have a new single ready for release in the wake of their sentencing (two years for “hooliganism motivated by religious hatred”).

You’ll note that this Big-R Rock action is all happening, as has been the case for some time, in lands far from rock’s birthplace. Which, to bring things back to China, and to yaogun – and, yes, to my book – is one of the main points of Red Rock. Yaogun is, like the examples above, a beacon to which rock and roll ought to be looking for lessons at just how much rock can, well, rock.

Alongside their report on Pussy Riot, Foreign Policy included a list of bands that took on their governments. They neglected to include any Chinese bands on the list, and while Cui Jian would tell you he did no such thing, he’s surely worthy of inclusion. It’s obvious that without naming names in the Pussy Riot style, that he did as much as any of the other names on the list to awaken people to the fact that there were other options beside those which were being force-fed.

And, wouldn’t you know it, yaogun happens to have come to my mind in the wake of all of this Rock-ing.

Pangu, like so many controversial artists, is a band that inspires intense feelings on both extremes of the spectrum – to the point that, to employ the old saw, there might actually be two kinds of yaogunners: those that hate Pangu, and those that loooove them.

Coming out of the southern industrial city of Nanchang, they sounded as rough as you might imagine they would upon learning that the band was comprised of machinists. Nanchang was the site of the first shots in the Chinese Civil War, when the Communists took on the Nationalists, and the birthplace of the Chinese military, the People’s Liberation Army. Frontman Ao Bo comes directly from that heritage, and believes that his cause is that of his forebears. “This is what the Communist Party requested that people do!” he told me. “Didn’t Mao Zedong say that wherever there is oppression we must resist it?”

Pangu was one of the darlings of the Chinese underground in their early days; they played an extremely raw form that didn’t sound, musically, as much like punk as it felt. Their debut album was a dark and vivid experience; “You Won’t Let Me Rock” spoke about the yaogun experience like few others, with years of living in the vise-like grip of a society that couldn’t process the kind of people that the members of the band were becoming vomited out in a four-and-a-half-minute howl.

“We want to be the child who says out loud that the emperor has no clothes,” Ao told the Taipei Times. “But aside from telling the truth, we also want to overthrow the emperor.”

And that’s what separates them from most yaogunners, and has gotten them into Pussy-Riot-type trouble. Or, more accurately, it would have gotten them into Pussy-Riot-type trouble, had they not moved to Sweden, after applying for asylum there, in 2004, in the wake of their performance at a “Say Yes To Tawian” festival. Taiwan, along with Tibet and Tiananmen Square, is a t-word for which Chinese authorities have little tolerance (and Pangu has achieved the t-word trifecta); with frontman Ao Bo’s call for Taiwanese independence both in the idea of participating in what was seen as a separatist event and in his actual words from the stage, word came to the band that they should reconsider returning home after the show, and, instead, asked Sweden to take them in. Which they did.

Since then – and, it should be added, before that as well – they have been poking at officialdom with a sharp, if long, stick; four years after their flight to Sweden, Pangu still was, in the words of a journalist that went looking for his Nanchang roots and legacy (scroll down to “Pangu Reprise” from the link) “a serious matter” to the local authorities.

Pangu has often taken inspiration from the headlines, writing and distributing songs before the news cycle is done with the story. The writer Zhang Lin was arrested for posting Pangu lyrics online; Pangu responded with a song, “Howl,” based on Zhang’s poem of the same name. They had their own Olympic moment, in the leadup to the Beijing games, when their song “BeijingFuckingOlympia” ruffled the feathers of authorities in Taiyuan – the song was named for and celebrated the name of a rock band in that city. When Yang Jia was sentenced to death for killing and maiming police officers in Shanghai, becoming something of a folk hero in the process, Pangu wrote a song around one of the lines Yang was said to utter as he went on his rampage (“I’ll Give You An Explanation”). 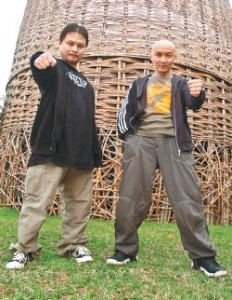 I can’t help but be inspired, as I watch people across the world join in the chorus of support for Pussy Riot and the widespread mainstream media coverage the story has garnered. And I wonder, too, about the next Pangu, and what kind of impact they might have (and about when Pangu’s Pussy Riot song will come out). But also, I’m reminded that an idealistic/Big-R Rock and Roll – one that attempts to Do and Change and Inspire – is alive and well, and living on a different side of the planet than many might have expected.

Thusly, should rockers turn their gaze Eastward for more than just to see how their music has traveled; they should check out how Important it has become to a large swath of the population.

1 thought on “Something Happening There (Not Here)… UPDATED”