One certainly identifies with Cui Jian’s lament about how kids today aren’t pulling their political weight, but we do also recognise that yaogun offers its share of exceptions to the rule—enough, one is quick to add, to fill at least one book. Herewith, one of the most recent exceptions.

Low Wormwood, a folk-rock act based in the northwestern steel-belt city of Lanzhou, put out their most recent album, The Watcher, in October. From the tracks now available online at their Douban page, one senses a big step forward for the band from the last record: While containing powerful moments, Lanzhou Lanzhou (2011) sounds like a band not quite fully fleshed out; The Watcher showcases a more mature group and sound.

The album, the band’s frontman Liu Kun told Time Out Beijing, is “more focused on what’s going on in China, on what’s going on with young people, on society and the world.” Rather than making specific criticisms, the article says, the band’s goal is to bring out individual stories. One such story is the one related to the album’s cover.

Making a statement via a cover image at a time when physical product barely exists is saying something in and of itself, but in this case, there’s more to it. 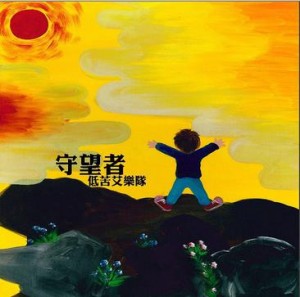 a painting by 12-year-old Xia Jianqian, doesn’t appear controversial. In a piece about the band, English-language newspaper Global Times quoted Liu as saying that the cover “expresses ordinary people’s eagerness for a peaceful and harmonious life.” One might add that it evokes a childlike wonder at the simple, if oft overlooked, phenomena that surround us.

But the artist was no “ordinary person.” Xia Jianqian is the son of a man sentenced to execution for murder.

In 2009, city officials in the northeastern city of Shenyang found Xia Junfeng operating an illegal skewer stand. In their attempt to arrest him—which, according to Xia and the six witnesses his family found that were not permitted to testify, was accompanied by physical violence—Xia stabbed and killed two officers and injured another. According to a People’s Daily article (among many other articles and resources related to the case translated by the good folks at ChinaSmack), “the ‘huge’ income” from the skewer stand enabled Xia and his wife “to achieve the greatest desire they’ve always had: Sending their son to painting classes.” (ChinaSmack also has a collection of Xia’s son’s paintings on display)

After an unsuccessful appeal, and just before The Watcher was released, on September 25, Xia Junfeng was executed.

The officials killed by Xia were chengguan: not quite police, they are the administrative enforcement personnel that operate in all cities in China. They have less power than the police and, perhaps as a result, have garnered a reputation for violence in their work enforcing city laws against vendors, illegal cabs and the like. But the story doesn’t end with the chengguan’s reputation: what might be even more significant is the response to that violence. There has been an increasing amount of average citizens railing against the abuse of power by officials such as chengguan. I wrote about punk group Pangu’s musical reaction to the uproar over the killing of police officers in 2008 by Yang Jia: The band, like many Chinese, sided with Yang in his reaction to the abuses of power inflicted upon the lower strata of society.

Liu of Low Wormwood told Time Out that Xia’s family situation was “analogous” to the band’s. “The kid and his mother, all they can do is wait for the father. Likewise, all we can do is keep watch and wait for things in China to change. So we called it The Watcher.” But the band isn’t simply waiting. “Music must assume the responsibility for reality and our society,” Liu told Global Times.

This scenario also brings to mind director Jia Zhangke’s latest film, Touch of Sin. The film, an intense series of vignettes based on recent events that captured the nation’s attention—corrupt village officials, violent migrant workers, suicides at the factories manufacturing the world’s electronics—lifts the veil on the country’s economic development to uncover the dark side of those left behind, particularly, as in the case with Jia’s past work, in the smaller towns around the country. When in Toronto for the film’s North American premiere, Jia was confident that all signs pointed to a China release date in the near future (and he remains optimistic); alas, that has still, not yet come to pass, and many observers saw that coming. 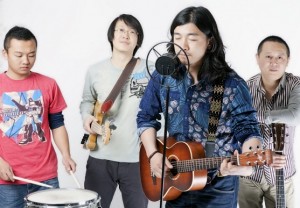 Low Wormwood, with The Watcher, has certainly tapped into that same behind-the-veil vibe, doing their part to show Cui that there are others aligned with him on his Long March.