The Big Party just wrapped up in Beijing has meant many things to many people. “Sparta” (si ba da or 斯巴达), as the Sino-weboverse has dubbed the 18th Party Congress (shi ba da 十八大) in order to refer to the otherwise unreferrable-to, has taken over. Sure, there’s a transition of power, but what seems to be clearest in all the transitioning is that daily life for your average capital-city residents has been made difficult – to say nothing of what it’s done to the city’s pigeon-flyers and ping-pong-ball distributors and to taxi passengers driven by less-than-fragrant drivers. Beyond the Middle Kingdom, the world waited in anticipation to hear who would step up as the country’s CEO and who would be on the Board of Directors. The world’s media seemed transfixed, breathing with bate, as the world watched, carefully, who helped whom sit where, who strode up to the stage in front of whom, and, you know, other matters of international concern.

Among all the transitional talk comes reflections on China’s relationship with various nations; how the new boss(es) will do on that front. But here’s what nobody seems to be talking about: Culture.

A recent piece in the Globe & Mail is typical of the what-now stories in the Party Congress’s wake. David Mulroney, Canada’s most recent former ambassador to China, is interviewed about the prospects, from here on out, of Canada’s relationship with China. What struck me here, and what has stricken me, and stricken me down, so many times over the years, is what seems to be an inability to look beyond trade and business in conversations about the relationship betwixt our countries.

Canada was full of excitement when our Prime Minister, Stephen Harper, headed to China in February, 2012. There was good news for “energy, natural resources, education, science and technology, and agriculture,” but those not privy to markets such as, say, that of the “lucrative” Chinese beef tallow market, were left in the cold. Despite the Prime Minister’s employment of the word “cultural” in his description of the increasing ties between the two countries, there was no cultural news, or real recognition of any news on that front, save for word that Toronto and Calgary zoos will get to host a couple of pandas. We constantly hear of the business and trade opportunities of international relationships, but so rarely does culture come into play.

It doesn’t take writing a book on rock and roll in China to realize that culture can do more than just entertain. When rock music – and, alongside it, literature, art, film and more – first entered China, it gave the early adopters a deep insight into the newly discovered world outside their country, and it continues to do so to this day. It also inspired a generation, and still inspires, to this day, in ways hard to quantify. When musicians started to visit, things went into overdrive.

As someone deeply involved in bringing musicians together – in both directions, into and out of China – of course I would feel slighted at how the idea of cultural exchange is so rarely discussed with any depth. But 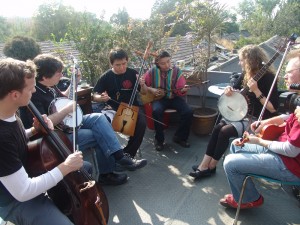 it’s hard to understand why culture should be so distant from these conversations. Folks like myself have been for all intents and purposes, diplomats of a different stripe, but diplomats all the same; ditto the artists with whom we work. I have watched as audiences in dive-bars, universities, clubs and theatres across China reacted to the presence of visiting musicians, and seen how the simple act of attending a performance transforms one’s idea of the Other. Visiting musicians, too, have had their minds and preconceptions blown as they observe and interact with those audiences and experience the nation around them. As someone who has put Chinese musicians in studios, parks, rooms and venues of all kinds with an international assortment of visiting musicians and watched how both sides of the equation come together, learn from each other and leave with new ideas, I can’t help but feel as though there is a gaping hole in official interactions that speak solely through trade agreements. I am saddened to see that so often the conversation is skipped out on entirely. Because, particularly in times like these, where things, generally, economically, are tough, it’s governments, and local embassies, that could be providing much needed support – and see such amazing and direct and fast results.

Luckily, it’s not all bad news, though the bad news is that the good news doesn’t get heard as far and wide as it should. The world needs to pay attention to some of the amazing artists and projects bridging East and West. Like the Norwegian effort to bring jazz to the far reaches of the Middle Kingdom, dubbed, like the official Chinese campaign, Go West, a program that I helped to start and a program which continues today.

There are artists like Abigail Washburn (pictured above alongside the Made-For-China Sparrow Quartet), who has been visiting China as a performer annually since 2004, working with a range of amazing musicians, from folk group Hanggai (above) to avant-garde guzheng player Wu Fei and beyond, and slipping into her set lists (in both China and elsewhere), a traditional Chinese tune or several. Along the way, her efforts have been supported by the US State Department and the American embassy and consulates in China, which surprises a lot of people – including yours truly, who remains in awe despite having experienced it myself. As this is being typed, Washburn is one of the artists participating in The US China Forum on the Arts and Culture, a gathering that bodes well for cultural exchange.

Pianist David Braid is another shining example of a walking, talking, performing diplomat. Since coming to China in 2006 with his jazz sextet, Braid has visited China just about

annually, recently performing solo, and demonstrating an amazing ability to fuse East and West with reinterpretations of pieces of music familiar to listeners on both sides of the Pacific. His most recent project, pictured at right, was his live performance to the massive-screen visuals of digital/visual artist Lu Jun’s experiments with ink and water. Lu had heard David’s work and was inspired to create a piece based on the music; Braid, in turn, improvised to Lu’s work. Meanwhile, an ongoing collaboration now several years old with Beijing-based guzheng player Chang Jing (video below from 2010) has resulted in some of the most amazing music of any kind, and I have personally met with several people who, years after seeing the duo’s performance, still recall it as one of their all-time favorite concert experiences.

Again: It’s not all bad news. But we could use some more good news.