Big ups to China Music Radar for this juicy tidbit, in which we are told of how Weibo, China’s Twitter, helped Chengdu, Sichuan rock band Mr. Chelonian emerge victorious over AMC Group, the company behind a Tiger Beer Battle of the Bands competition that had refused to pay the fee the band was promised.

In the wake of their August performance at the Tiger Battle of the Bands, Mr. Chelonian had 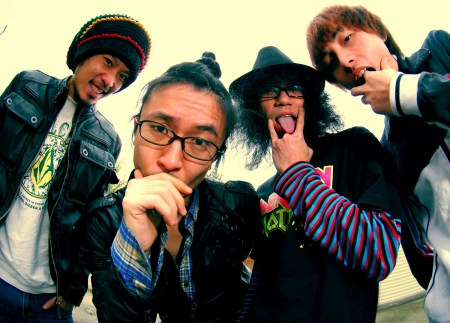 asked nicely for the remaining 90% of their performance fee, having secured a 10% deposit in advance of the gig. By November, the band, still awaiting payment, took to Weibo to let the world know of the situation, which seems to have turned the tide: 2300 retweets (re-bos?) and hundreds of comments later – and after refusing an AMC demand to delete the tweet and apologize – the band got their money.

“We’re a band that makes music and performs with love,” they had said in their tweet heard ’round the nation, before switching to harsher tones. Speaking to the “unscrupulous” industry, they added: “Don’t forget that we also have bones as hard as rock and roll.”

They’ve come a long way. When I met the band, in Beijing in 2009, they were still a relatively fresh-faced bunch, full of a youthful energy and happiness that came from their reason for hitting the capital city. Back then, they were part of a group of Chengdu rock bands on a tour supported and organised by the yaogun institution Little Bar. The club, which had 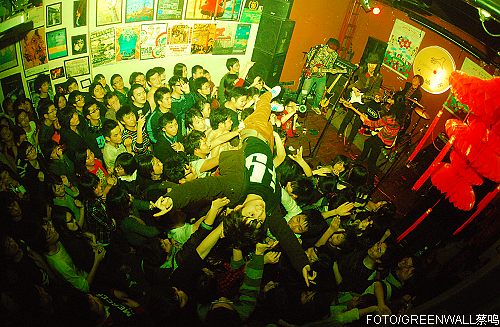 begun in 1997, had grown beyond anyone’s imagination: by 2009, it had become deeply involved in nourishing Chengdu’s scene through record releases, local showcases and an expanding brick-and-mortar venue, as well as, on several occasions, arranging national tours for a sampling of their city’s finest. In fact, it was for more than just one reason that Little Bar was responsible for the band’s 2009 Beijing appearance: In 2007, three years after forming, Mr. Chelonian had moved to Chengdu, from the deep-southern city of Nanning, primarily because of their experience touring through town and performing at Little Bar.

I saw, in the innocence of our first meeting, how they might wind up with an “English” name as uncomfortable as theirs – and I raise the issue not only because I find myself eager to portray the discomfort with which I’ve been referring to the band’s name throughout this piece. This is a serious problem for yaogun bands, for their names, for their songs, lyrics, album titles, tour names and more. If the choice to use English is to signify the desire to engage the English-speaking world –  then it is incumbent upon the band to do so with full knowledge of the name by which they engage. It’s been a long time since the use of English, with no regard to meaning, in and of itself is to signify hipness. English names are normal in yaogun, and thus, bands need to go beyond a dictionary and ask a native speaker. Or, heck, keep it in Chinese.

海龟 haigui is a sea turtle; 先生 xiansheng is Mr. Yes, the official genus to which sea turtles belong may well be chelonia. But the band’s Chinese name is also the homonym for sea turtle, ‘return from overseas.’ And those Chinese – and there are literally hundreds of thousands of them –  who return to China after stints abroad are, in fact referred to as ‘sea turtles.’ So there’s that. But then, the band might just be big Doctor Who fans, in which case, well, keep the name.

At any rate, the band’s nomenclatural deficiency is (probably) beside the point. The point here is that yaogun, like rock and roll, is a dirty business. ‘Business’ being the key word – though ‘dirty,’ too, is important. I’ve written before about the creeping corporate presence in yaogun (and, one is quick to add, so has China Music Radar, in a piece I reference in my own), and it’s important for artists, particularly younger bands like Mr. Chelonian and others even younger of the type that would enter a Battle-of-the-Bands-type event, to understand what they’re getting into – and, more importantly, how to get out of whatever that may be. Particularly since the trend is only going to become more widespread.

Lucky for Mr. Chelonian, they knew who was buttering their proverbial bread: As someone who has been gigging for dollars before, I know all too well how unclear the situation most often is. Event A hires Company 1 to supply a band; Company 1 looks to friend B to help in the search, and by the time a band is found, there’s a bowl of alphabet soup murkied up by a numbers game, every level of which is taking the requisite piece of the action. When it’s time to get paid, the difference between the Event’s budget and the amount the artist sees, and the distance between the Event and the Artist are equally vast.

Let’s hope word spreads even further, striking just enough fear in the hearts and minds of all the would-be-unscrupulouses with their eyes on yaogun’s prize(s).