He’s been a star onstage for thirty-odd years now, so it’s only reasonable that Cui Jian, the inventor of yaogun, would opt to join the action on other sides of the stage. And the action in question is not his film forrays: in 2009, he was one of three directors that contributed segments to Chengdu, I Love You (which, by the by, debuted at the Venice Film Festival); his 3D concert film came out earlier this year; and his full-length directorial debut, Blue Bone, which tells the story of a young musician, is set for a 2013 release. No, Cui is looking to branch out into another place altogether…

…Seems that Cui Jian is getting into the business of concert security. According to the China Daily, Cui has been disheartened by observing how security guards tend to stop audiences from “standing up and interacting with the performers.” And so, like at many other points in time when he saw something in need of repair (music festivals; lip-synching; etc), he aims to step up.

Images that might run through the mind of one experienced in the outside-of-China live circuit at the mention of ‘concert security’ likely consist of large, beefy dudes that flank the stage’s front looking for too-excitable fans to beat back behind the guardrails. The Chinese context, though, is somewhat different. 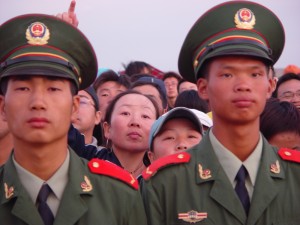 At right, members of the 2005 Gegentala Grasslands Music Festival security detachment (these guys also happen appear on the cover of Red Rock ). Not burly dudes, by any stretch, and, perhaps significantly, not concerned, so much, with the crowd; they’re watching the show along with everyone else, making one wonder what their role, exactly, is supposed to be.

Below, a shot I took from the stage at 2010’s Midi Music Festival while Marit Larsen performed. 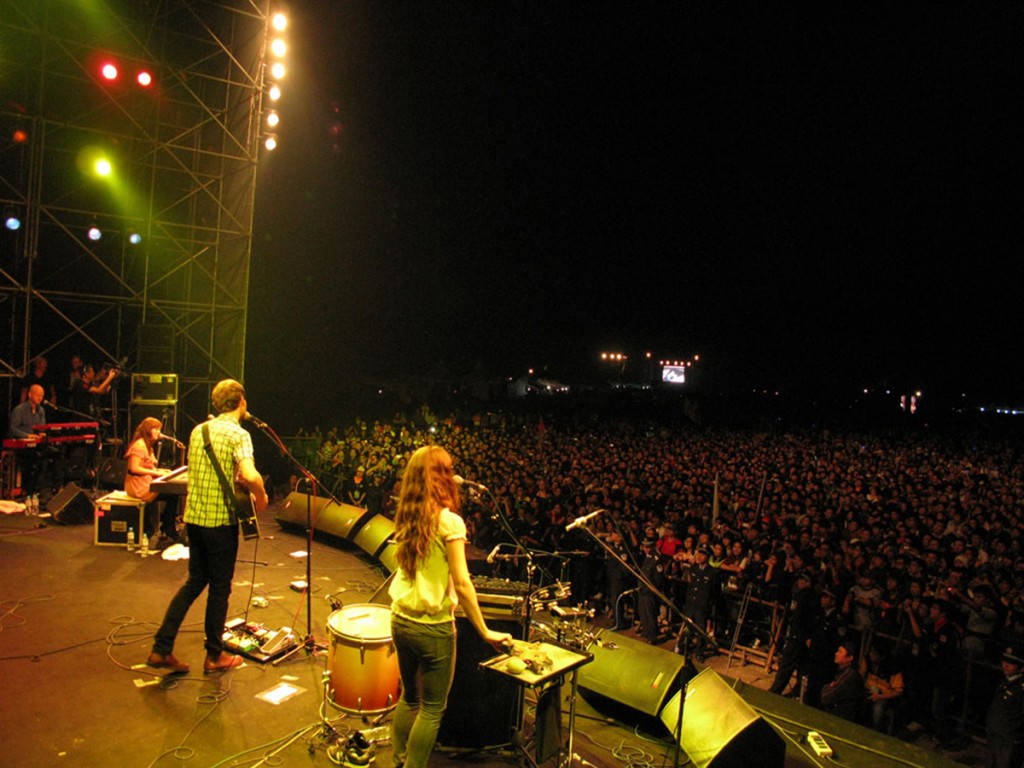 In both instances, security (on the lower image, down in the pit, and visible if you look hard), evidenced by the uniforms, are not exactly in the concert security business. Again, note how security is, here, watching the show, not the audience.

To be fair, audiences are, for the most part, relatively well-behaved. And, if you’ll pardon a bit of horribly reductive but demonstrably reasonable logic: They tend to listen to authority figures, even in the yaogun sphere, when the whole idea is supposed to be that there are no authorities more authoritative than you. But on the authority side, it hasn’t been made clear to me that security forces employed in the live environment believe that their role is to maintaining a safe environment for audiences. It seems to be about crowd control rather than overall safety. Young out-of-their-element uniformed dudes waiting until their higher-ups yell them into action by pointing something that’s happening that isn’t ‘approved’.

The thing about concert security, like all elements of the – remember! – still-young music industry and landscape, is that there hasn’t been a whole lot of institutional knowledge built into the system, because there hasn’t been a whole lot of institutional knowledge yet collected. Particularly since it doesn’t seem to be in the interest of those that provide security (army, police, other governmental bodies) to improve. Wham! and Jan & Dean, who performed in China in 1985 and ’86, respectively, baffled audiences and security forces alike with their music’s ability to literally move folks; it doesn’t seem like much has been learned since then, something that Cui recognises:

“‘I want to have a company to train people to become real security guards,'” the China Daily quotes Cui as saying. “‘Serving instead of controlling the audiences and guaranteeing that the audience have a good time.'” 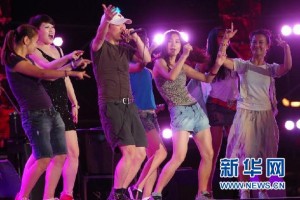 Part of that good time, of late, has involved his invitation to the more excited female fans in crowds to join him onstage as part of the finale. This, one might say, is the latest incarnation of his career-long testing of the boundaries of the live music sphere, particularly as far as security personnel have been concerned. In the past, rather than exciting fans by holding out the prospect of joining him onstage, Cui’s music, and the expression it represented, affected audiences in such deep ways that security folks were dealing with people so emotionally, and physically, affected by the music that they literally didn’t know what to do with their bodies. I have seen footage of people who were having fits of either ecstasy or severe distress – the music affected them so profoundly that it was hard to know the difference; indeed, they may have been experiencing both (and more) simultaneously.

“‘Rock music has been considered noisy and dangerous in China for the longest time. But I can tell you that rock fans are very peaceful, pure and simple, just like rock music itself,'” Cui tells us. “‘They shouldn’t be managed in my concert.'”

The idea of Cui heading into the security may seem trite, trivial and just plain uninteresting, but it seems to me that it’s an important part of Cui’s commitment to yaogun. Concert security is not, by any means, a glamorous part of the business, but it is an essential one, and one that, at best, goes unnoticed: The ideal is for an audience to be unaware that security’s presence had anything to do with their experience. The flipside is its importance: When something goes wrong, it goes so horribly wrong it’s impossible not to notice (and here is where I again state that on the audience-safety front, just like on the onstage-safety front, it’s unclear to me how nothing ‘major’ has happened thus far; I worry about when ‘something’ might).

So here’s to Cui’s efforts at changing the live experience one step at a time, and his willingness to step into the otherwise uninteresting frontiers at which things might, slowly, improve. Here’s to his belief that improvements are not only eternally possible but that it is incumbent upon yaogun to get involved.

The trailer for Chengdu, I Love You (featuring a brief glimpse of yaogunners Miserable Faith):

Chengdu, I love You trailer by blankytwo

“Blue Bone” by Cui Jian (the video footage here is of an unknown origin and likely, given the 2010 posting date of the video, not related to the upcoming movie of the same name):