One of the most important bands to come out of Beijing’s underground, Tongue, has recently re-emerged after a short absence, playing a handful of gigs, one of which was filmed by the folks at Le TV.

Begun as a cover band in Urumqi, the capital of northwestern Xinjiang Province, the group moved to Beijing in 1997, eventually anchoring the scene based out of Tree Village, that dusty outskirt that was the base from which many musicians, among them the stars of yaogun today—including Miserable Faith, Mu Ma (now Mu Ma and Third Party) and Ruins (now known as Zhou Yunshan and Ruins)—were based

Tongue dominated through the early aughts, as even Cui Jian—not one to name names—came out with kudos for the band. Their live performances featured a strange combination of two very different kinds of intensity: guitarist Zhu Xiaolong was as extroverted as vocalist Wu Tun was hidden; as Zhu banged his head, body and guitar, Wu faced cross-stageward, moving only slightly, growling more than singing, and inspiring an intimidation one might associate with the father that breeds bone-chilling fear in his kids by not ever raising his voice, threatening such a complete shit-losing crazy if it came to voice-raising that folks are kept in line.

The band had a bumpy ride with record labels, two of which released products not fully approved by the artists, but enjoyed a fierce loyalty from the yaogunners that followed the band’s journey from struggling underground artists through to something resembling stardom—yaogun style. In 2004, the band toured France (and yours truly went along for 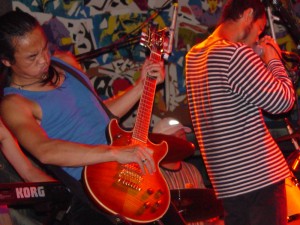 Between 2009 and 2012, the band went on hiatus; at the tail end of 2012, they returned to the stage for a festival in Xinjiang and, after a few months of rehearsals in Yunnan —that lush southwestern province that, thanks to its laid-back pace, fields of wild marijuana and temperate climate, has been the site for so many yaogun hiatuses—they performed at Hangzhou’s West Lake Festival in June of 2013. Vice China chronicled that show, calling it the band’s “great return” (video of that set here).

Their return to the Beijing stage was captured by Le TV at the end of September, but before checking that out, a window into early Tongue via a video of the tail end of a performance of “The Painter” (油漆匠) at the Midi Festival in 2001—particularly in light of the fact that over the 2013 National Day holiday, they closed out the 2013 Changjiang Midi Festival, on the outskirts of Shanghai, playing to tens of thousands.What a difference a dozen years makes—for band, festival and audience. Take note, here, as the camera pans crowd-ward after Wu has told them that “Rock and roll isn’t important. What’s important is you guys.”