Transcendence (超过那一天), is a 3D film not only of the 2010 New Year’s Eve (and 2011 New Year’s Day) Cui Jian concerts in which Cui and his band performed with the Beijing Symphony Orchestra: Mixed in is non-concert footage representing, as the not-very-helpful promo material has it, the past several decades. Alas. The film hit Hong Kong theatres in late September, marking its first foray off the Mainland. It was released in the Mainland in May of this year, a full year after I’d passed along this here report of a preview of the film. 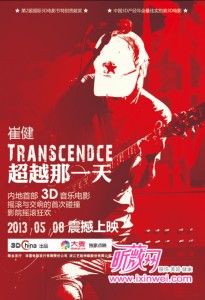 The version that Hong Kong theatre-goers will see, and the one that Mainland audiences saw, is not the full film: Excised from the final version was “The Last Shot” (最后一枪), an epic and, even before collaborating with the symphony for the concert in the film, symphonic number that took just under four of its five minutes and nineteen seconds before featuring the entire sparse, and controversial, lyrics:
“A stray bullet hit my chest.
Instantly my life flashed before my eyes.Oh! The last shot…”

Whether or not the song, which was released on Cui’s 1990 album, Solution, was a direct reference to the shots fired in Tiananmen Square the year before is, on the one hand, eminently clear, and, on the other, not something that Cui would ever admit to—being the sort of artist that refuses to parse his lyrics: “All the things I want to say,” he’s quoted on Transcendence‘s Facebook page saying, “I say in my songs”—but the fact remains that the song was left out of the 3D film. Fortunately, the internets are full of cutting-room-floor material (see below).

One other lyrical tidbit worth noting viz. the film’s Hong Kong release: In addition to the film’s title referencing the song (which was released in 1997 as a single and translated as “Get Over That Day”) that has tended to end Cui’s live shows—when audience members are plucked Courtney-Cox-style from the crowd to join in the onstage revelry—it is also a song that is Cui’s commentary on Hong Kong’s 1997 return to China. In it, he raps of a sister he never knew whose return to the family was imminent and of the mixture of emotions leading up to the reunion. “I wanted to write about the complex feelings we had,” he told the South China Morning Post.

And, because the preview ends with the notice that the song just featured, “The Last Shot,” does not appear in the film, here is that cut footage, which has, of late, been making the rounds: