In light of a recent piece in ChinaFile on the wackiest bunch of Shanghaiers in the land – and, for anyone in Beijing this weekend, in advance of the band’s performance there – I thought it appropriate to revisit the phenom that is Top Floor Circus.

The band’s frontman and founder, Lu Chen, who started out singing pop songs following his love of karaoke, dismissed Nirvana as the worst band ever when he first heard it, but came around soon thereafter, deciding that his goal was to make a band louder than Nirvana. Lu is finally ok with his pop roots: as he told ChinaFile, “we don’t mind being a pop band.” And he is bringing that pop to more folks than ever…

Top Floor Circus, who sings, mainly, in Shanghai dialect, is a band that amazes and confounds; for me, they are at the top of two of my personal lists: One of my all-time live music highlights was the band’s late-2005 Beijing set, which I covered for PopMatters; one of my all-time live music lowlights, though, was being in charge of the evening at which they performed in May, 2007.

In 2005, and, if we’re being honest, still, today, Beijing yaogun audiences (heck, Beijingers, generally) were not, on the whole, excited about anything coming out of Shanghai – especially if they were going to be singing in Shanghainese. But it was pretty quickly evident that this was going to be something very different. I’d never been handed a lyric sheet (at left, the header to those sheets) at a rock show before, for one. Any concerns I had over the Chinglish on the lyric sheets disappeared when the pre-show movie started: a punk training camp had band members dying off one by one in pursuit of perfect punktitude. I spent the evening with a big smile on my face, having finally seen a band poke fun at yaogun. Post-modern punk, I called it then, and I have yet to see anything remotely as interesting come out of yaogun since: Top Floor’s introspection, self-awareness, irony and ability to laugh at themselves and the Whole Thing is not exactly widespread. 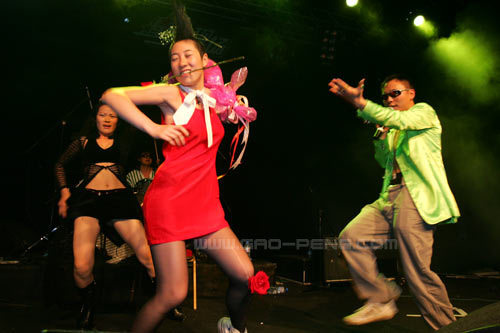 Fast-forward two years, and I’m watching them, again, but this time, from a backstage perspective. It’s night three of the Apres Midi series of concerts, where I put together five nights of club shows for bands at the Midi Music Festival. The band was a last-minute addition I was happy to make, seeing as how I was still buzzing off of their previous show. It wasn’t that I wish I had been in a better mood to take in this incarnation of the band. It was that I wish I hadn’t been in charge of the evening’s program. Or the guy that the club turned to when something was amiss. Because things, quickly, went amiss.

In the aforementioned ChinaFile piece, the word “transformative” was used to describe Lu Chen’s stage personae. That would be, in my experience, a huge understatement. As Lu, dressed in a bright and gawdy zoot-suity-ensemble, announced to the crowd that they were watching the Top Floor Circus Song and Dance Troupe, the eager-to-please, grateful-for-the-opportunity-to-play and quiet demeanor of the guy I’d come to know was erased from existence.

The problem wasn’t so much that he brought a ‘working girl’ (above, in the background) onto the stage to do a little dance – or, indeed, that her high heel may well have put a hole in the onstage carpeting that a phalanx of club staff insisted upon taking me on a tour of while asking for a ridiculous amount of money in compensation for the “damage” (I would, again, and equally bafflingly, deal with the same club’s hair-brained conception of what constitutes “damage” and “recompense” when my own band performed there). I even appreciated his inclusion of Kang Mao, frontwoman of Subs (pictured in red, above), in the festivities.

The primary concern, beyond any potentially “damaging” onstage antics and guests, was that the band’s set went far, far beyond the allotted 20-30 minutes and there was no getting through to them that they were eating into the sets of the other bands on the bill. As I recall the chaos of that night, I see the stage, with several extra guests and the detritus – flora, fauna, clothing – scattered about, and feel, a full five and a half years later, tangible stress levels. I recall several quick chats to the guitarist standing nearest to the side of the stage in which he had said that yes, this was, indeed, the last song. Eventually, he acknowledged that there was just no getting through to Lu, and we were all held prisoner by this wacky rock and roll extravaganza. 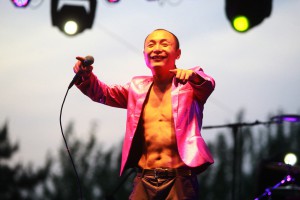 What I had missed out on, with all the madness of dealing with the mechanics of things, was that in contrast to the poking-at-punk first time I’d seen them, the band turned their attention to the classic (Chinese) pop tunes of the eighties, attempting to transform Star Live into the song-and-dance-halls that were, for most Chinese in the eighties and nineties, the main nightlight experience. It wasn’t a subject with which I was familiar, but I now know I would’ve loved to have been in the audience that night. (See this [Chinese] report from one audience member)

I only learned later that the band long had a reputation for anything-can-happen live shows, with one constant: Lu ending up pantsless at some point. I don’t recall a pantsless Lu that night. I do recall, as he finally made his way off the stage, his obliviousness to the idea that anything abnormal may have gone on, and his immediate return to his lovable old self.

My search for evidence of that May, 2007 night turned up the following video, wherein Top Floor Circus makes a mess of “Nothing to My Name”:

In that horrific-for-me-a-treat-for-the-crowd gig back in ’07, I see now, were the seeds of something more. The nostalgia he referenced in his ChinaFile interview, and which was the driving force behind the Apres Midi set, might have reached its ultimate expression with “Shanghai Childhood,” a song that he performed on television early in the new year with Mao Amin (and to which the ChinaFile piece linked), one of the biggest Chinese pop singers of the late eighties (it’s worth pausing to note that she chose this opportunity to plug her own upcoming concert by singing a Top Floor tune).

It might well be seen as a retreat from the straight-up stick-poking that defined not just Top Floor’s punk period, but its biggest, and most dangerous gambit: having at the Shanghai Expo. When the band tweaked Beijing’s Olympic theme song, “Beijing Welcomes You,” to “Shanghai Welcomes You” and “Shanghai (Doesn’t) Welcome You” (live version of the former here), which exposed how the Expo welcomed outsiders’ money while screwing locals, the band had a run-in with The Law, who scrubbed the original video from the internet, and called the band in for a chat. The band stopped performing the song.

But the mission hadn’t changed. Nostalgia is still the driving force: a nostalgia for a pre-Expo Shanghai was the impetus for the two “Welcome”‘s; and that nostalgia is part of the recipe that will achieve Lu Chen’s long-term goal of bringing as many people into the Top Floor fold as possible. “I want people to think ‘oh, that song is for me!’” Lu told me in 2009. “People like the courier guy, or the woman working in the hair salon.” With the televised approval-and-then-some of Mao Amin, he has gone a long way to achieving that goal.

The original video for “Shanghai Childhood,” comprised of a collage of childhood pics submitted by fans, is below, and comes via Andy Best’s Kunfuology blog; the lyrics, in English and Chinese, are here (unfortunately for Mandarin-speakers, the Shanghainese pronunciation guide is not available), and with them, the Karaoke halls of the globe await.

It is in those halls, surely, that Lu Chen will see the ultimate expression and success of the tune.