Yaogun, lately, has been busy on film… Cui Jian, Subs, and now: Baishui. 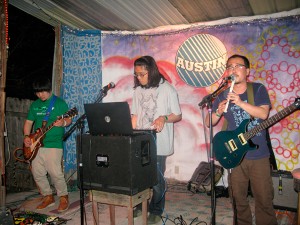 You’ll remember Baishui, of course, from his recent adventures in the US, at SXSW and a select number of other cities. You can be reminded of those adventures by checking out this article, which has just gone up, at ChinaFile.

The latest news on Baishui is the release of his soundtrack to director Cao Baoping’s Einstein and Einstein. The film, which one review called “a searing generational indictment,” just saw its world premiere at the Busan International Film Festival, and is about a thirteen year-old girl’s relationship with her estranged father. Baishui’s soundtrack, which ranges from subtle solo piano to haunting electronic-fuelled gothic soundscapes and everywhere in between, is now available for sale on Bandcamp.